To tan or not to tan, that is the question - DNG Online Limited
Skip to content

To tan or not to tan, that is the question

UP UNTIL a few years ago I was always the palest of the pale.

Don’t get me wrong I know growing up in Scotland doesn’t help and sun-kissed isn’t the most common look in Dumfries and Galloway but I was whiter than white.

It really hit me how pale I was when I went on a girls’ holiday to Zante in 2013 and at departures I was paler than the arrivals,

I’d dabbled in gradual tanning lotions and they always provided a nice realistic looking tan but the hassle, stickiness and state of my bed sheets didn’t make it worthwhile.

After coming home from Zante looking like I’d spent the past week in an igloo I decided to give sun beds a try to be tanned for my 19th birthday – which at the time was little over a month away.

The results weren’t exactly fast so I kicked my tanning up a notch and before I knew it I was the most bronze I’d been in my life.

At last arrived my birthday and to say I was tanned was an understatement. A few of my friends hadn’t seen me since the tanning began and were shocked – even accusing me of getting a spray tan.

The compliments were fantastic – I felt healthy, thought it made me look thinner and more alert with no more eye bags and no need for foundations or concealers.

But oh how the mighty fell – my want for a healthy glow soon turned into an unhealthy obsession. 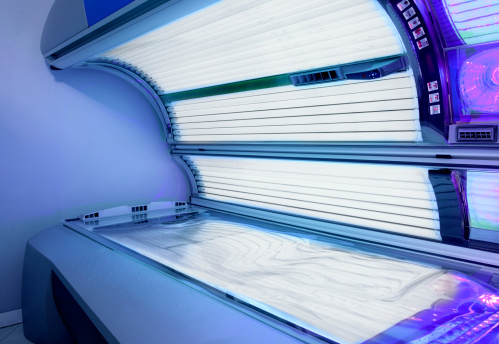 I would forever be comparing skin tones with people – feeling triumph if my tan was greater and itching to jump on a bed for a sneaky 12 minutes if someone was more tanned – I developed a literal fear of paling in comparison.

Sometimes I wouldn’t even want to go on a night out if I couldn’t grab a tan session beforehand.

I even went to a festival and worried my tan would fade in the three days I was parted from my beloved tan bed.

It had become an unhealthy obsession and my lovely glow just wasn’t as lovely any more.

Family, friends and even colleagues were starting to worry by this point and so I agreed to let my tan fade for the winter but when spring rolled round I was straight back on the beds but only this time the tan didn’t take quite so well.

Then I went on holiday with my boyfriend and my obsession with tanning saw me layer on the tanning oil like there was no tomorrow, much to his disgust, while out in the sun – resulting in a big blister on my shoulder just in time for my 20th birthday – enough to put anyone off tanning (and looking at me).

My quest to be a tanned teen had seen me enter my 20s looking and feeling worse for wear.

Though my experiences haven’t scared me for life (either physically or mentally) and I still wouldn’t say no to a cheeky sun bed session, I would advise everyone to learn to be happy in the skin they’re in.

A GENEALOGY website has revealed the most common surnames in Dumfriesshire in 1841.