PRINCE Harry followed in his late mother’s footsteps during a visit to Angola last month – thanks to the efforts of a charity boss from Dumfries and Galloway. 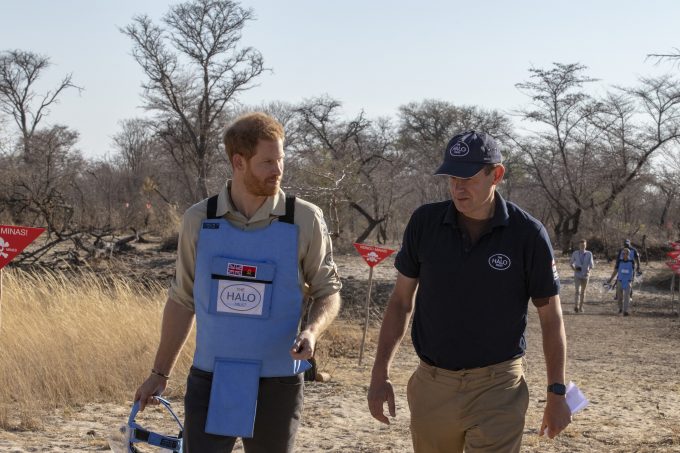 And now James Cowan, CEO of the HALO Trust in Thornhill, has revealed what the visit to the minefield project at Huambo meant to the Royal.

It is 22 years since Princess Diana took the same 50 metre stroll and Prince Harry saw the legacy left behind by her trip there just months before her tragic death in 1997. The area is now a thriving street filled with shops, houses and a school, thanks to HALO’s work, which is supported by UK aid money.

Former Black Watch commanding officer James, 55, said: “It was clearly an emotional visit for Prince Harry to follow in his mother’s footsteps and see her legacy in Huambo first hand. This visit mattered a great deal to him.

“He was hugely struck by the transformation in Huambo and is incredibly passionate about honouring the work started by his mother. He is committed to helping HALO emulate in Angola what we’ve achieved in Mozambique by making it mine free.”

He revealed that the Angolan government has announced $60million of funding to the HALO Trust to clear 153 minefields in the south east of the country and added: “This new project will take us five years and combines three things that are closest to Prince Harry’s heart – the humanitarian, his love of Africa, and his love of the wilderness.”

And commenting on the Prince’s character, he said: “I know Prince Harry a little bit from our time in the military and I’ve been delighted to work with him at HALO.

“He’s funny, he’s got charisma, and he’s also got a great sense of what really matters in this world. I think that is a very wonderful combination.”

The HALO project will be carried out where Angola borders the Okavango Delta, which is home to 50 per cent of the world’s African elephants, and the charity hopes the animals will benefit.

“Poaching is a consequence of poverty, and poverty in that part of Angola is caused by minefields because people can’t grow normal crops, so they rely on bush meat.

“Clearing these landmines will open up that land to being restored to its proper use as one of the world’s great natural wildernesses.”

He added: “Prince Harry’s visit has really put a focus on demining in Angola.

“There’s a lot of work ahead and money to be raised before we can totally clear Angola of deadly devices.”

Meanwhile, the charity has launched their ‘Breaking Boundaries’ campaign to raise funds to also carry out their work in Zimbabwe.

Explaining more, James said: “We want to help Zimbabwe recover its reputation as the breadbasket of Africa and removing landmines will help unlock the country’s potential.”

HALO is an acronym for Hazardous Areas Life-support Organisation and works in places like Iraq, Afghanistan, Yemen, Libya, Syria to remove the deadly devices.

Dad-of-three James knows all too well the devastating impact of landmines and IEDs after commanding the Black Watch in Iraq in 2004.

He said: “The whole point about landmines or IEDs is that you never know it’s coming and if they go off you are dead.

“I feel very passionate about demining because they are very evil weapons. These weapons are indiscriminate, they kill non-combatants, innocent women and children, and they carry on killing and maiming years after a war because they stay in the ground.”

He said: “Landmines are indiscriminate weapons of war that maim and kill innocent men, women and children, their devastation lasts long after conflict has ended.

“HALO Trust is a Scottish charity that is a world leader in demining, and I am proud that through UK Aid Match, we will double generous donations from the British public to help rid Zimbabwe of these deadly explosives.

“The UK Government is deeply committed to clearing landmines in Zimbabwe and across the world, so no one has to live in fear of one wrong step.”