A WOMAN from the region has shared her husband’s cancer survival story in a bid to make sure other families keep an eye on their loved ones. 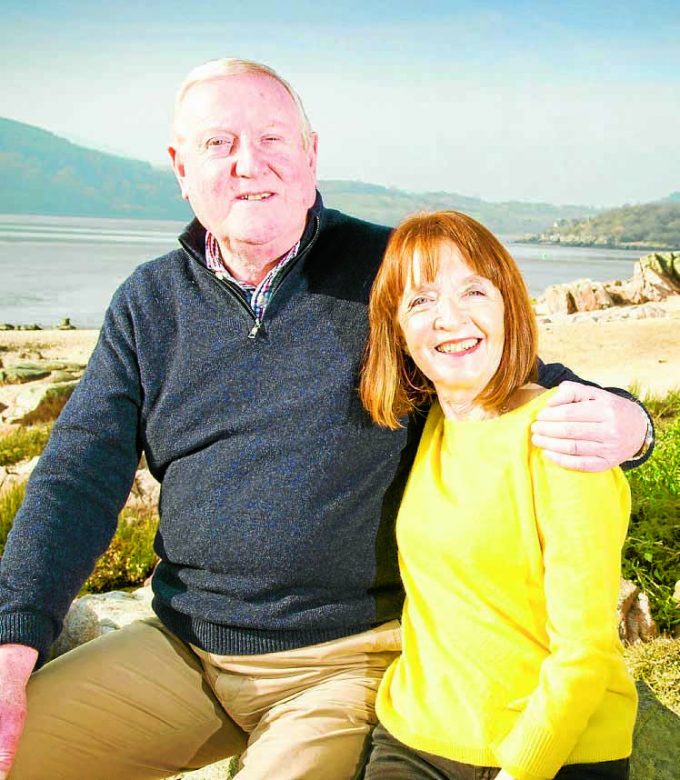 Sharon Withers, 68, whose husband John, 70, was diagnosed with bowel cancer in 2009, has spoken of her gratitude that it was found early. John made a full recovery and now volunteers for Bowel Cancer UK, using his experience to encourage others to take part in the bowel screening test, as well as raising awareness of the disease, signs and symptoms and risk factors.

And the couple, from Kippford, are taking part in the Detect Cancer Early Survivors campaign to highlight that getting checked early is key.

Father-of-two John was diagnosed shortly after his 60th birthday. He had surgery to remove part of his bowel, but during the operation another tumour was found, meaning the surgeon had to remove the whole colon and fit a stoma.

Sharon said: “It was a complete emotional rollercoaster. Although John kept himself upbeat, it was a lot to get our heads around.

“I was surprised at how well he handled it all as he’s always been a rather squeamish person when it comes to anything remotely medical, but he totally took it in his stride. He was really focused on recovery and setting himself targets. He was very determined. The medical staff all said John’s positive attitude played a big role in his recovery.” Now retired, John returned to work as a civil engineer just five months after his surgery. He said: “Obviously it was a huge shock when they told me the news after the operation, but I was just so happy they’d managed to remove the tumour and I tried to remain positive. I also didn’t need to have any chemotherapy or radiotherapy after the operation.

“When I was in hospital recuperating, I was surrounded by plenty of people who were much worse off than me. Seeing them recovering after such major surgery gave me a lot of strength and motivation to have a positive attitude and go on to lead a normal life after recovery.”

The family have now got a new lease of life and marked his 70th birthday with an ‘incredible’ holiday in Barbados. Sharon said: “Going through something like this makes you appreciate these moments even more than ever.

John also volunteers at the Macmillan Cancer and Information Centre at Dumfries and Galloway Royal Infirmary and has been all over the UK giving talks on the importance of screening. Sharon added: “Even when he was still in hospital he decided he wanted to get involved somehow and give something back. Men in particular can find it difficult to talk about health concerns and I think there can be a bit of embarrassment around things like this, so I’m really proud that he’s putting his experience to such good use by helping others.”

And John added: “It’s been nine years since my operation now, and that’s nine years I might not have had if my cancer hadn’t been picked up when it was. I had no symptoms whatsoever to indicate anything was wrong, so it just shows you how important it is to complete the bowel screening test when you get the chance.”

For more information visit getcheckedearly.org. and to read other survival stories search for the #MySurvivor