SOME would say there is no better way of getting your new year off to a positive start than by helping others in need – whether it be family, friends, or pets.

Others may argue that implementing an effective exercise routine is imperative to following through on the widely-used mantra ‘new year, new me’.

Whilst out on her New Year’s Day run through the town and along the River Nith, Emma, who is the director of Genesis Occupational Health and Safety (OHS), stumbled upon a group of people gathered near the water where a dog had fallen and become trapped.

She said: “As I was running along the back of Dumfries Academy I saw a big group of people along the path and in all honesty, I thought it was a big family, and as I got closer I saw that the people weren’t moving.

“I went up to them and asked to get past and someone said “there’s a dog in the water,” and as I walked past and looked down the dog was there just beside the wall and they had thrown a ring down.” 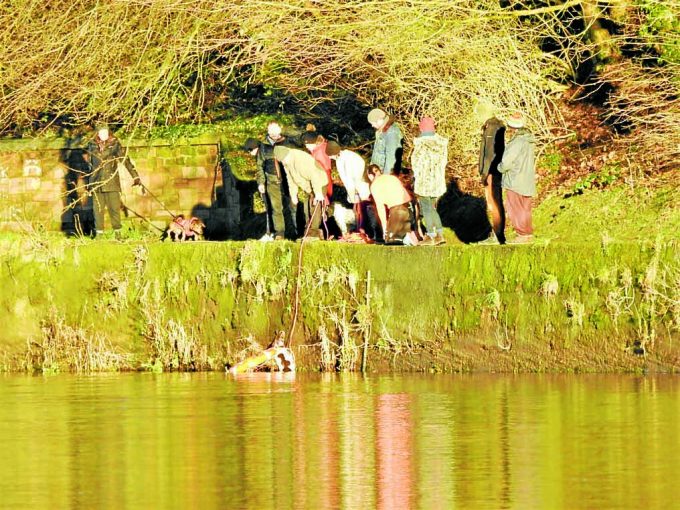 Concerned for the helpless spaniel and eager to act quickly, Emma phoned her nearby dad and asked him to bring a ladder to the scene. However, she added: “I realised he might take a while, and I’m looking at this dog and he’s absolutely freezing, so at this point the couple that had thrown in the ring offered to hold the rope if I wanted to lower myself down, which I thought was a good idea as it wasn’t high and the river wasn’t very deep either.”

Discussing the heroic moment she pulled out the pooch, whose name she later learned as Rosie, Emma said: “They both held an end of the rope and I just eased myself down off the wall and then I just paddled along, lifted the dog up, passed it the owner and then I got out and went up and checked on the dog, who was shivery freezing.

“I phoned my dad and said he didn’t need to bring the ladder as I’d got the dog out, but asked him to send one of my children with a blanket so my youngest daughter, Rachel, ran down and we wrapped the dog up and then walked home.”

“The following day, the owner and his wife came round with Rosie the dog and she was absolutely fine – the wife said as soon as they got home they heated her up and got her all wrapped up in her bed. And I even got some flowers and a wee cuddle from Rosie as well which was nice.”

Reflecting on what made her take the plunge last Friday morning, Emma said that working with Genesis OHS means risk assessment is “what goes through my head all the time,” adding that she “analysed this, asking why I was the one that jumped in.”

“When I arrived there were already loads of people there,” she said, “but I was in smelly running clothes and a lot of those people had been out on their New Year’s Day walk and maybe had their brand new Christmas boots or jackets on and I was really warm; I’d just run 12 kilometres and I do a lot of open-water swimming, so know what it it’s like to be in cold water, so I don’t think I did anything special I just think that I was the one least concerned about getting wet and I was already warm.”

Modest Emma added she has been “really flattered by all the kind comments and things that people have said” since the rescue.