TEAM GB enjoyed their best ever performance at the European Indoor Athletics Championships at the weekend.
And one young woman from the region had a bird’s eye view of proceedings. 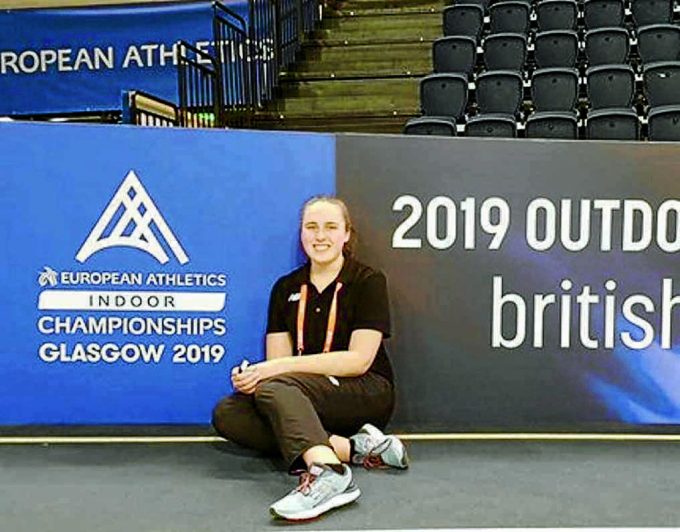 For Alison Pringle, 21, from Ecclefechan, spent three days working trackside as a young official at the meet in Glasgow’s Emirates Arena. Describing the weekend as ‘absolutely incredible’, she said: “I managed to get so much experience as a national technical official at my first international event. I am honestly struggling to highlight just one best bit, but the atmosphere was something else, especially when Laura Muir was running.”

She worked in a team officiating mainly at the shot putt and said: “All the officials there were amazing too. The organisation behind it was something else. So much work gets put in behind the scenes and they have done a great job.”

Alison is currently in the final year of a podiatry degree at Queen Margaret University in Edinburgh, but for many years has been involved as a member and official with Annan and District Athletic Club’s junior section. It was through her affiliation to ADAC that she last year heard about the chance for young officials, under 30, to register an interest in being a technical official at the 2019 championships. Anyone interested had to have officiated at least ten competitions and have a wide range of experience. Alison was more than qualified as she undertook her first officials course in 2015/16, after she was put forward by mum Mhairi. Since then she has completed further qualifications and said: “At first I thought I wasn’t really going to do anything with it, just help out at the small local competitions. When I went to university, however, I ended up travelling across to Glasgow to help officiate at some of the indoor competitions and ended up working through my licence levels.

“Currently I’m a level 2 field official but hope to have enough competitions to earn my level 3 by the summer.”

Meanwhile, it’s back to the studies and clinical placements this week for Alison, who will graduate later this year.