The Bard is back in town

AN ICONIC 16th century inn has unveiled a homage to Rabbie Burns this week. 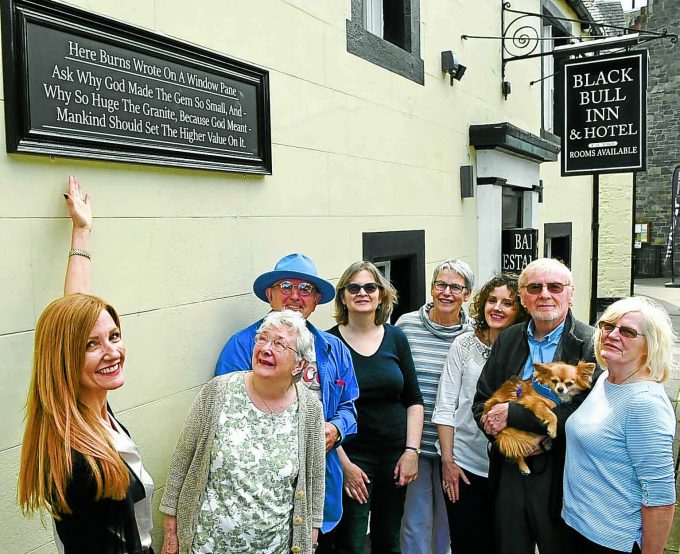 The poet was an admirer of a beautiful but petite local girl, Deborah Davies and one day, as legend goes, while he was drinking at the inn he saw her ride past, accompanied by a tall and portly lady.

Someone asked him why God had made one lady so large and Miss Davies so small.

In reply, Burns etched his famous ‘Epigram to a Scrimpit Nature’ on to a nearby window: “Ask why God made the gem so small and why so huge the granite? Because God meant mankind to set the higher value on it.”

The original window is now in St Petersburg in Russia after being gifted to Tsar Nicholas 1st who visited Moffat as a young man aged 20 in 1816 when he was a Grand Duke, accompanied by the general who defeated Napoleon at Borodino outside Moscow, Field Marshal Kutusov.

But this week the inn’s new owners, Mark and Janie Seaton, set about honouring the inn’s link to Scotland’s best known poet.

Janie said: “When I took over the Black Bull Inn my customers told me they wanted to see the links between Robert Burns and the inn restored after being dormant for a very long time.

“I could see this was very important to the community who are proud of their Black Bull/Burns history and, with this in mind, I made it my mission to bring the Bard back to his natural home in Moffat.”

She added: “I have been weaving him back into the essence of the hostelry in several ways, but my piece de resistance is this plaque on the wall bearing the precious verse from a lost window pane etching the Bard did during a drinking session here.

“With the verse back in The Black Bull, I have given the community the Black Bull they asked me for six months ago and I hope they will be as proud as I am . . . however, I’m not finished yet and there’s lots more to come.”

Get the full story in the Moffat News
Next issue published Thursday 27th February 2020.