A FOOTBALL team in Gretna have walked to victory by winning the Over 50’s league title. 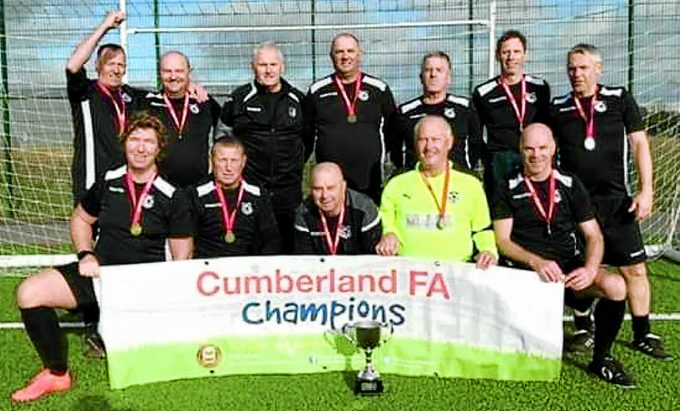 Gretna FC 2008 walking team won the Cumberland League after all teams had played the 14 games of their respective campaigns. Going into their final three matches of the season at Lakes College in Workington, Gretna were level with their rivals from across the border, Workington St Joseph’s Blue.

t was the team from Cumbria who were first up for the Anvils and both sides battled hard to draw 1-1, meaning Workington were in the ascendancy to finish in top spot. This result was followed by a dominant 3-1 victory against Workington Blacks, meaning that Gretna would need to win by three clear goals in their final match to be champions.

Carlisle United Greens were the opposition which stood in their way, but were dealt with in comprehensive style as Gretna won by a staggering scoreline of 10-0 to become Cumberland FA champions of the over 50’s league courtesy of goal difference. An early strike helped settled the nerves and after that quick passing from the team brought about total control of the game as the goals just kept on going in. From the 14 games played, Gretna took 35 points from a possible 42 by winning 11 games, drawing two of them and only losing once, as well as bestowing a goal difference of plus 32, which helped them lift the title as second place Workington St Joseph’s Blue also had the same stats but had scored eight fewer goals in the league.