A PROMISE to ‘engage constructively’ on future plans for bridges in Annan was made by the Deputy First Minister this week.

In the days following the devastating loss of both the Jubilee and Cuthbertson bridges, John Swinney visited the remains of the treasured structures and heard from local residents, prominent members of the community, politicians and emergency responders.

While many expected a pledge for action or a funding announcement, instead came a sympathetic ear and promises to monitor the situation.

Mr Swinney said: “I go away with, I suppose, three principal points that people have made to me: one, that there’s an active resilience community here, who do a lot of good work to protect people; secondly, that there are householders that have problems that are not necessarily associated with the river, but wider flooding issues that have got to be addressed; and thirdly, that the community feels the loss of infrastructure with the loss of two bridges, and the last point is the most complex and it is the one that’s got to involve a lot of good work in the community and the local authority principally. 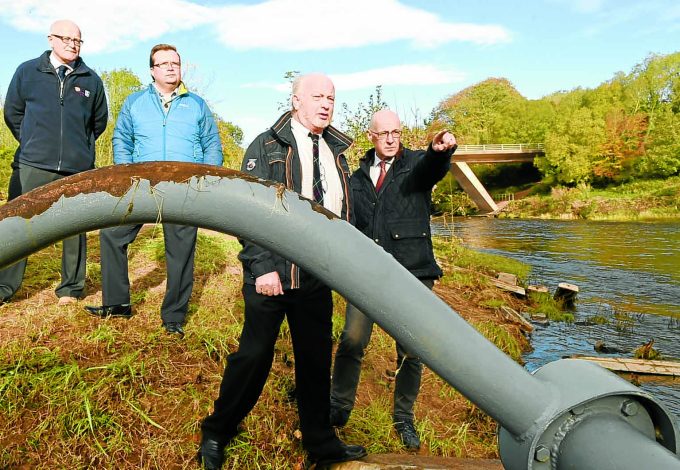 Referring to the Scottish Government’s role in proceedings, he said: “We’ll engage constructively, it is very early days.

“It is a discussion that the community has got to have with the local authority about what to do, because it is significant infrastructure.

“The Government is here as a constructive player in all of that, but fundamentally the community and the local authority need to engage about what’s the way forward around about that infrastructure because clearly there is a loss of amenity of great significance and precious amenity for the community.”

He also commented that careful consideration must be made about the design of any future bridges to replace the Cuthbertson and Jubilee bridges.

Mr Swinney said: “Looking at the damage it is clear that the bridges were quite high and still felt by water at a very high level.

“Then you start getting into design questions but it is a bit early for that.

“But certainly I would want you to take from my comments that the Government is prepared to be constructive.

“I think as part of that, the community has got to have time and space to have a proper discussion.

“These are not just two ordinary bridges, each of them has got significant history about them. And that has got to be respected.”

Mr Smyth called on the Deputy First Minister to ensure the Scottish Government provides funding to reinstate foot bridges, when he secured an urgent topical question in Parliament.

She said: “I know how important these bridges were to the people of Annan and I will continue to press the Government to do all it can to help replace them.

“It is early days but there are a lot of different avenues we can explore, including the possibility that we could tie in Queen Elizabeth’s Platinum Jubilee in 2022.

“As a council we will work tirelessly with all those involved in order to find a solution.”

Councillor Jackie is the best!

PLAYERS at Langholm Rugby Club will be reaching for their razors next week after successfully completing the Movember challenge.

WEATHER warnings for snow and high winds have been issued for parts of Dumfries and Galloway.

Christmas shoeboxes on their way

Annan and Eskdale, Lockerbie and Lochmaben

Do you recognise this woman?