Susi and Ruthie team up for new book

CHILDREN’S author Susi Briggs has launched the latest in her series of Nip Nebs book.
And Nip Nebs and the Last Berry, which features illustrations by Ruthie Redden, has got a celebrity fan. 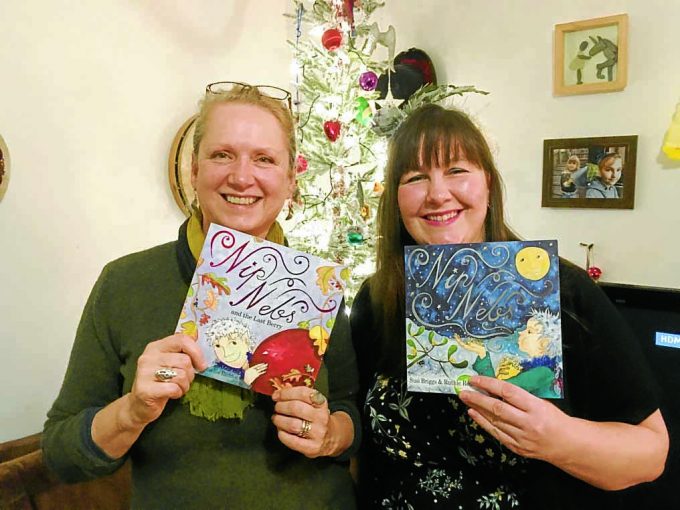 Actor Gary Lewis who is famous for his roles in Billy Elliot, Gangs of New York and Outlander, was so impressed with the first Nip Nebs book that he has written a foreword for the pair’s new book. Gary said: “Let me tell you straight up: I love their work. It’s personal. I’m a fan. When I read the Nip Nebs stories I feel the rhythms o my ain folk, my grannies and grandas and those before them. The absolute charm of the book crosses generations and cultures. This is the magic and sheer Nip Nebbery of it!”

In the new tale, Nib Nebs and his wee mouse friend are snoozing when their sleep is disturbed by three birds arguing over the last berry on the tree. When Nip Nebs goes to try and help sort the problem, things don’t turn out as he expects.

It is written in Scots and the illustrations also tell the story, with pixies to find in every page. Author Susi, who is based in Gatehouse of Fleet, said: “I was only ever taught to read and write in English even though I spoke Scots at home from the age I could speak. About ten years ago a publisher rejected my English written story The Wee Sleepy Sheepy and told me they would publish this if I omit the ‘Scottish flavour’. The only Scottish word it in was the word ‘wee’. I knew then that Scots speaking children were not represented in the mainstream. I had to teach myself to read, write and create in Scots language in order to make some remedy to such a sad truth.”

The first Nip Nebs book was shortlisted for Scots Bairns’ Book o the Year at the inaugural Scots Language Awards and she received a Scots Publication Grant from the Scottish Government for the latest instalment. Susi said: “We are proud to be part of a growing consciousness of the expressive beauty and validity of Scots language in children’s literature.”

Illustrator Ruthie added: “Listening to folk, both old and young, reading the story aloud and hearing this beautiful lyrical language brought to life through the pages of our book is the icing on the cake.” It is published by Curly Tale Books based in Wigtown and now widely available.