LECTURERS and staff from the University of Glasgow’s Dumfries campus are on strike this week in a dispute over cuts to pay and pensions. 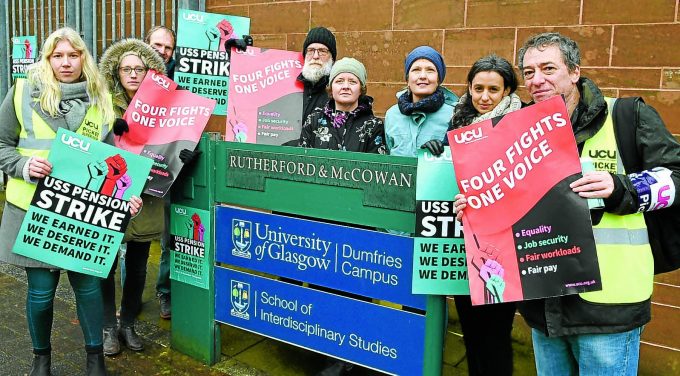 The members of the UCU union are taking part in eight days of industrial action against real term cuts in pay of around 20 per cent since 2009. They also want action on the gender gap, casual contracts and rising pension contributions.

Most lectures have been cancelled as staff manned a picket line outside the Rutherford McCowan building on the Crichton campus and UCU rep Benjamin Franks said: “There are 35 UCU members at the University of Glasgow. That makes up about 70-80 per cent of all academic and academic-related staff (some staff are represented by different unions). Exact numbers are not possible to determine as to who is on strike (as some work off campus), but it clear that an overwhelming majority of union members participated in the strike action today.

“A dozen union member colleagues were on the picket-line alone. Many more will be taking part in future days.”

He also revealed that striking staff and students are organising free Teach Out events, held in the Theatre Royal. Benjamin said: “The Teach Outs show that we are still committed to providing education even when out on strike. Teach Outs show students that we still care about them and their education, and that strikers are not just putting their feet up.”

Meanwhile, Professor Julia Buckingham, of Universities UK, said: “In recent months, employers have taken significant steps to protect the value of both pensions and pay because we care about our dedicated and talented staff. “Universities will do all they can to minimise the impact of any strike action on students, their other staff and the wider community and they know that their colleagues contemplating strike action will want this too. We sincerely hope UCU will see the merit in working with employers on joint and fair solutions.”