FAILED thieves fled the scene of a Langholm supermarket in the early hours of this morning. 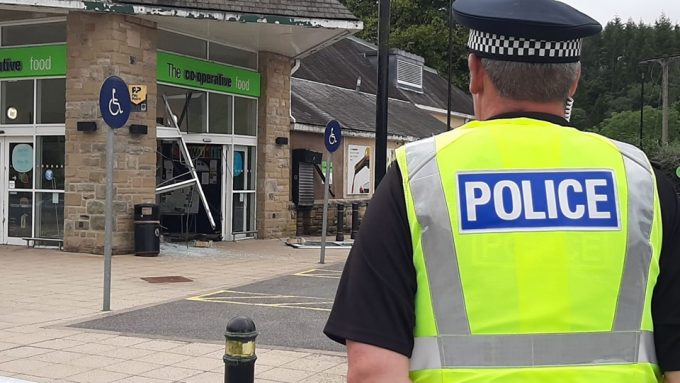 The thieves attempted to make off with the ATM from the Cooperative store in Glenesk Road, Townfoot Langholm, just after midnight this morning.

Reports were made to police from members of the public following a number of loud bangs and screeching car tyres in the area of the Cooperative.

Officers arrived at the scene to discover a smashed up store front.

Detective Inspector William McDicken said: “This has been a determined attempt to breach the security of the shop using a vehicle to smash through the front doors.

“Police are carrying out extensive enquiries in the town in an effort to identify any vehicles which may have been used in this crime. We are looking for what is probably a badly damaged 4 x 4 type vehicle and a second vehicle appears to have been at the scene at the time of this crime.

“I am thankful to those members of the public who called Police Scotland at the time the crime appeared to have been committed.”

He added: “I would ask anyone to get in in touch if they saw any suspicious vehicles or people in the area of the Cooperative in Langholm especially after the store closed around 10pm on Thursday night, or indeed in the days leading up to this crime. I would particularly appeal to anyone who may have private CCTV, or a dashcam in their vehicle, to review it themselves, for any vehicles moving about the town, either late on Thursday evening, or early on Friday morning.

“Anyone who has any information, no matter how insignificant they might think it might be, should get in touch with us on the 101 number, quoting the reference number 0018 5/7. Anyone who wishes to pass on information and remain anonymous can do so through Crimestoppers, on the 0800 555 111.”