Scream if you want to go faster

‘FEEL the fear and do it anyway’: that’s my new motto after spending the day rallying with some of Scotland’s best drivers.
It was both a terrifying and tremendous experience and left me quite literally shaken and stirred with a heart rate of 120 bpm! 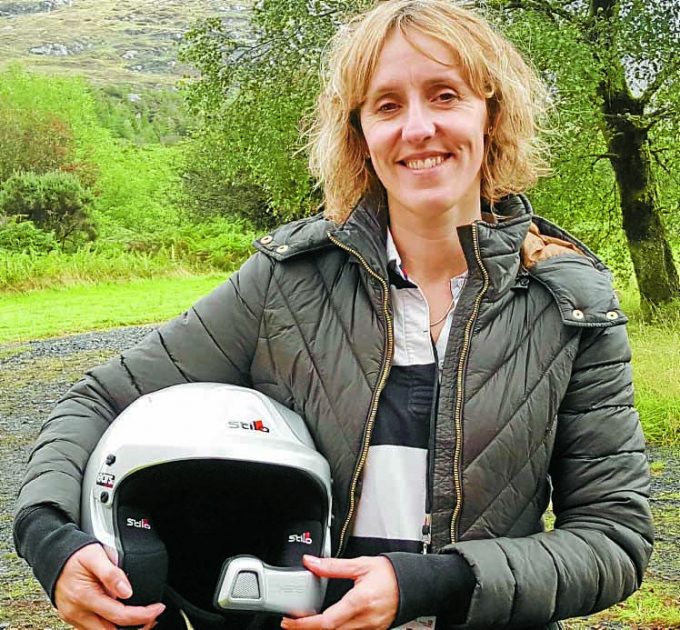 I’m still not quite sure how I ended up at the preview event for this weekend’s Galloway Hills Rally as I’m the least likely thrillseeker: I don’t particularly like rollercoasters and I’m not a fan of flying, so the thought of screeching round gravel forest tracks at over 90 mph was never something I hankered after.

Initially I hung back and let all the motorsport fans scramble for the passenger seat, but I couldn’t hide forever and all too soon it was my turn to don a crash helmet. Keith Riddick, from Haugh of Urr, had the unenviable job of taking me out for my first spin in his MG ZR (and trying to keep me calm.) Despite all his reassurances that I’d be fine and even knowing his family rallying pedigree, my nerves – like the car – were in overdrive.

We’d barely set off and I was asking him to slow down as the combination of speed, sound and sensation crashed into me. Luckily that was the only crashing that occurred on the day. He did tone it down, although it still felt suspiciously fast to me, especially on the hairpin bends, and a few squeals may have escaped my lips . . .

A couple of calming cups of tea and some cake later and I feel emboldened enough to agree to another shot, this time in the hands of two time Scottish Rally champion Jock Armstrong, from Dalbeattie. It’s home turf for him and he’s got the silverware to prove it, so this should have been reassuring. However, whereas my screams had slowed Keith down, they had the opposite effect on Jock, and we flew round the course in his Subaru Impreza. I’m sure we must have set a new land speed record.

He ‘helpfully’ gave me updates on just how fast we were going and as we screeched round one corner, sending gravel flying, he revealed he’d once crashed out at that exact spot. I think I momentarily stopped breathing at that point and may have sworn a tad. Okay, I’ll admit it: the peace of the beautiful Galloway forest was definitely shattered by some choice expletives from a terrified yours truly. “Are you always this dramatic?”, Jock asked as we pulled up to the finish line, claiming he’d only actually been doing two thirds the speed of what he’d normally do.

Fearful as I was (and I really, really was), I managed to keep my eyes open all the way round and could appreciate the skill, control and pure class of both drivers, who must have lightning fast reflexes and be utterly fearless. I was fascinated to find out what makes them tick and what attracted them to such an adrenaline fuelled sport, and so I valiantly tried to quiz them in between shrieks. Following family footsteps was the answer in both cases and it definitely felt like a family affair trackside with their siblings helping out. They also admitted they both prefer to be in the driving seat, naturally, and make terrible passengers, something we had in common!

Now that I’m safely back on terra firm and still in one piece, I can actually look back on the experience with awe and the respect it deserves. I won’t be rushing to book a bungee jump or leap from a plane anytime soon, but it was good to completely bulldoze my comfort zone and face down some of my fears.

A relieved Fiona after a spin with Jock Armstrong, left

Rally heads for the hills