OVER 30 years of work to create a red squirrel haven in Lockerbie is at risk. 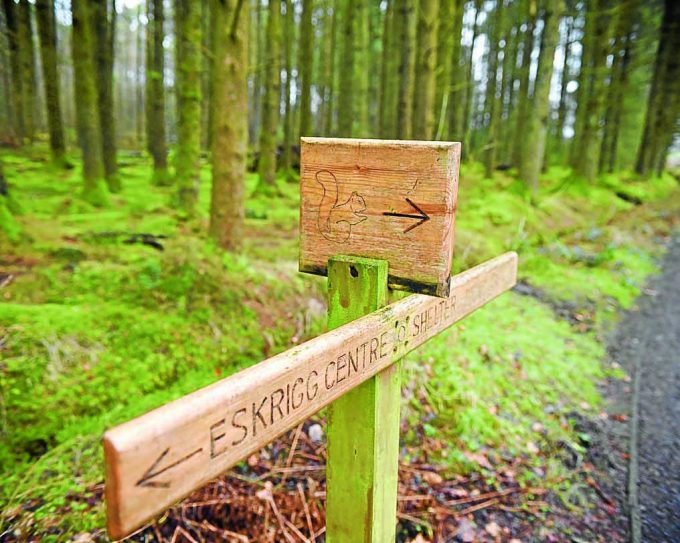 Thanks to the work of reserve manager Jim Rae, a visit to Eskrigg Nature Reserve meant an almost guaranteed sighting of beautiful, healthy red squirrels in their natural habitat.

But in recent times the small, woodland creatures have been moving away from the popular hide area. And it is believed that an individual is ‘luring’ the squirrels to the opposite side of the forest.

Yesterday, Lockerbie resident, wildlife photographer and daily visitor to Eskrigg George Trudt explained the number of red squirrels he has seen over the last few months has rapidly declined. He said: “I am there every day, either walking the dog, or dogs, and then about once a week I am also there taking pictures. Usually you see a couple of red squirrels and even if I don’t, the dogs sense them and stop and look up the tree.

“I can honestly say, so far this year, I have seen one red squirrel. My experience is that over the last six months there have been fewer and fewer to see, and not just at the main feeding area but all through the wood.”

Several visitors to the reserve have reported that a woman spends around six hours a day camped out in the forest and say she could be the cause of the unusual movement. Mr Trudt said: “There’s a lady that used to sit out in all weathers, she used to feed them at the hide area but then she set up a feeding station and gradually moved it further and further away. She’s obviously attracting them with a food source that’s much more exciting — that’s how she’s lured them away.”

George, a former Eskrigg Trust board member, explained that the feeding station at the hide allowed the health and population of the squirrels to be monitored and anything unusual to be reported to Jim.

He added: “It has been more than 30 years of work that has been put into that area and that could be completely erased. It’s a real kick in the teeth. “There’s no doubt there’s one, single person that’s done this damage. Maybe she doesn’t see it like that, but there’s a risk of undoing over 30 years of work.”

The lack of red squirrels is also beginning to affect visitor numbers. Mr Trudt explained the area is known across the world as a good location to spot red squirrels and if fewer people come to view them, there will be fewer donations to keep the reserve going. He also expressed concern that if the mystery feeder was unable to attend Eskrigg, there was a risk of the animals going hungry which would increase their risk of succumbing to virus or infection. Jim Rae was approached but said he was unable to comment at this time and police officers involved were not available.

The woman was this week also sought for comment but could not be located in the reserve.

Get the full story in the Annandale Herald
Next issue published Thursday 2nd April 2020.