A LARGE crowd witnessed the official naming of Nith Inshore Rescue's latest boat at their riverside Glencaple base at the weekend.

The replacement for the team’s specialist inland waterway and loch rescue inflatable was given the name ‘Cauley’ in a ceremony performed by the charity’s patron, Lady Herries of Terregles.

It was dedicated to the memory of Dumfries teenager Macauley McQueen, who tragically died in the River Nith last winter .

Nith Inshore Rescue was involved in the extensive operation to try to find the young man, an effort which inspired his family to later raise funds for the team through a series of events.

This resulted in a donation of more than £12,000.  That combined with a grant from the UK Department of Transport helped secure the new ‘second’ boat, replacing one, which, after 10 years service, was getting past its best.

Part of the money is also going towards the 20-strong team’s wider fundraising effort to upgrade other equipment and build a much-needed extension, including training room, for their building. 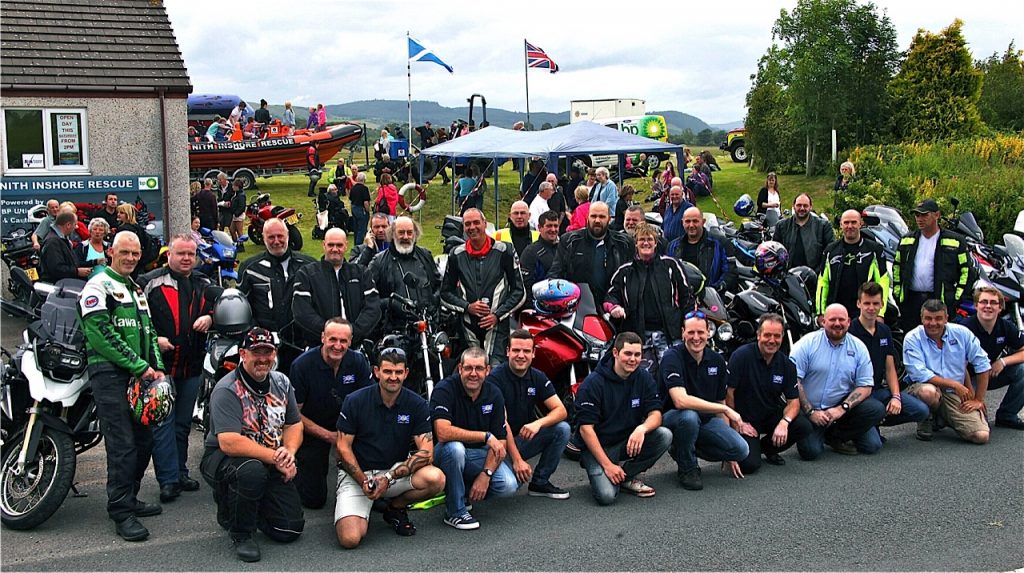 BIKER BOOST . . . members of the Institute of Advanced Motorcyclists with crew members and other supporters

Secretary Peter Bryden said: “The crew was deeply moved by the efforts of Macauley’s family and friends to raise the money.

“We thought by naming the boat Cauley, which was how Macauley was affectionately known, we could remember him and recognise the effort made by his family.”

Members of the McQueen family, including Macauley’s mother Gail and father Steve, were at the naming ceremony, which coincided with Nith Inshore Rescue’s annual open day on Saturday.

They unveiled a commemorative plaque in the boat house.

Also taking part were Annan HM Coastguard Unit, representatives of the boat fuel sponsors St Michael’s Filling Station and a crew from the Scottish Fire and Rescue Service, which gave a demonstration.

A cavalcade of bikers from the Institute of Advanced Motorcyclists, also long-time supporters of the team, concluded their annual charity run at the event and enjoyed the barbecue and other attractions.

Mr Bryden explained that demand for the volunteer crew’s services had grown since its foundation in 1981 reflecting the increased water and extreme weather – related call-outs.

He said: “We are attending calls in a wide area of Dumfries and Galloway and parts of north Cumbria, most recently in the River Esk at Longtown.”

Four Students knocked their collaborative project out of the park