MORE than 50 people protested outside Young's Pinneys factory in Annan on Friday expressing anger at the site's proposed closure.

The event was organised by Catrina Baxter, a former worker at the food processing plant, where 450 jobs are under threat.

Among those at the gathering at the main gates were off-duty staff, families and other townspeople, who were joined by constituency MSP Oliver Mundell and community councillor Joyce Wylie.

Passing vehicles tooted their horns in support, attracting cheers from those taking part in the protest.

Mrs Baxter, 42, who lives in the town, put down the large turnout to the strength of feeling against the closure plan across the community.

She said: “The demonstration started from an idea I floated on social media and just took off. More and more people soon became involved.

“There is a lot of anger about the decision and even how the announcement was handled.

“People here are either affected or showing solidarity with those who could lose their job. Many have given years service to the company. It is going to have a massive impact on the community.”

Mrs Baxter added: “Some households have more than one family member at Pinneys. In my case my sister, brother-in-law and niece work there, together they have more than 50 years service in total.” 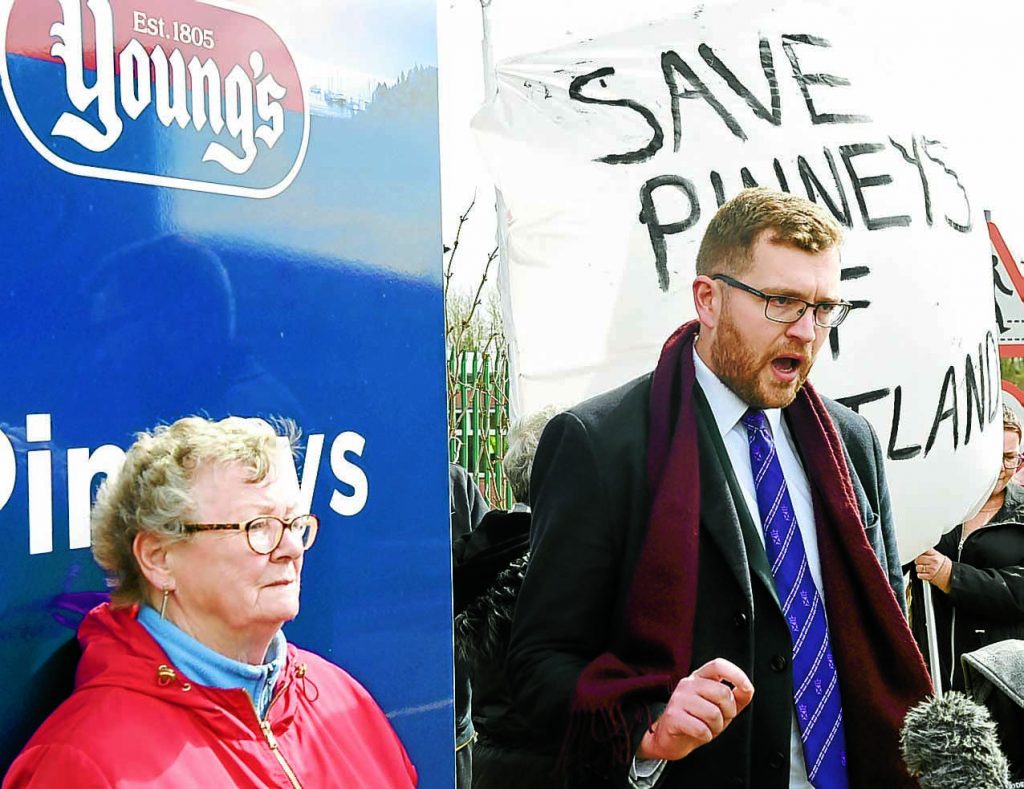 Meanwhile, the local MSP chatted to many of those taking part in the demonstration pledging his continued support for efforts to retain employment at the site.

Mr Mundell said: “I don’t want to make false promises or offer false hope but it is not too late for Young’s to change their mind.

“There is also the possibility that other companies may take an interest in the site in the coming weeks.

“The support of the Scottish Government is welcome and it is now time to see that turned into action.”

Mr Mundell revealed that he and his father, local MP and Scottish Secretary David Mundell, planned to arrange a joint-meeting with Pinneys’ workers in a local hall in the near future.

Meanwhile, Mrs Wylie pledged the support of the community council to the workers.

She said: “This is all so sad. There are so many people, including young families, who could lose their income if this factory is not saved.

“It also gives so many of our young people their first experience of work. It can provide summer jobs in their own community.”

A Young’s spokeswoman last week stated that the current production arrangements at the Annan site were ‘no longer financially sustainable.’

Road work ahead? I sure hope it does!

A DUMFRIES born goalkeeper has swapped saving shots to help save lives in Ukraine with demining charity The HALO Trust.