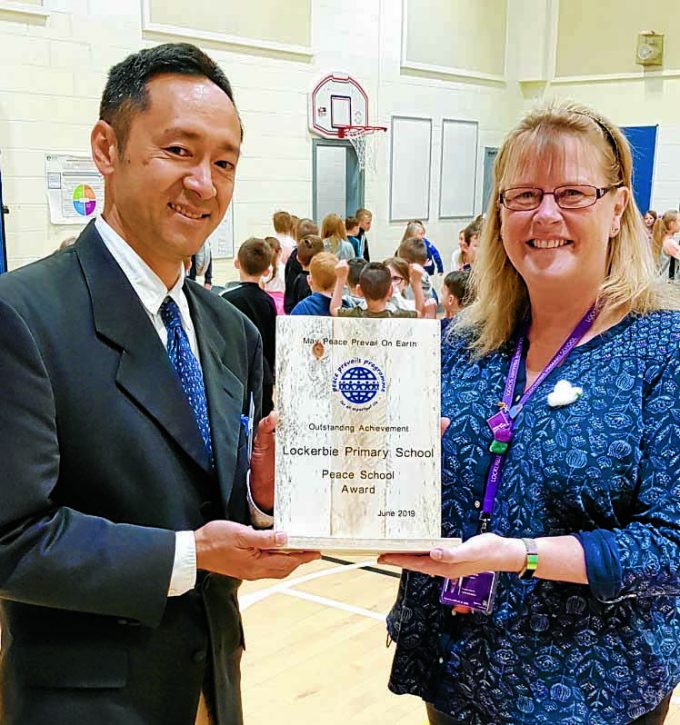 The award was presented by Yashio Mochizuki, from the Goi Peace Foundation in Japan.

It makes the school’s achievements including: embedding a peace programme in their. curriculum; celebrating the United Nations ‘International Day of Peace’ (September 21) every year since 2013; every child in the school has written a peace message, which is now inside the school’s Peace Pole; A ‘World Peace Flag Ceremony’ was held to mark the 30th anniversary of the Lockerbie disaster last December; the whole school has learnt to sing a Russian peace song – and more.

Depute head Karen Carter said: “The Peace Prevails programme originally fitted into our school curriculum and has merged perfectly with our nurturing and restorative approaches. We work with our partner schools across Europe and the rest of the world during each year on various peace activities, with a particular focus each September leading up to the UN International Day of Peace. This work has helped us hold the British Council’s International School Award for the last nine consecutive years. The whole school involvement in the World Peace Flag Ceremony in December was a really important focus of work for commemorating the 30th anniversary of the Lockerbie disaster. Even six months later, my pupils can remember which country’s flag they carried and what they learned about that country. We are proud to have received this award and look forward to being part of a developing worldwide network of peace schools.”