A TREE that was planted in memory of a Lockerbie Air Disaster victim has gone missing. 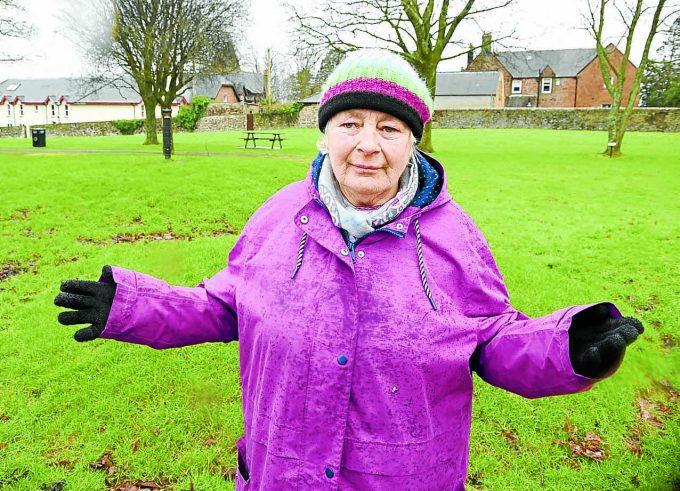 Resident Nancy Hogg, above, noticed that a 70ft fir tree in the town’s McJerrow Park has mysteriously disappeared and fears it may have been chopped down earlier this year.

She says the tree had been planted a few years, alongside a white plaque, in memory of an American victim of the 1988 disaster.

The issue was raised at the town’s community council meeting this week, with Ms Hogg asking for someone to look into the matter. She said: “There was a white plaque that said in loving memory of Liz Marek but that is nowhere to be seen too. The family got planning permission to plant a tree in the park. I would go up every year to see the tree and plaque. I would then inform the family back in America on how the tree was looking. But this year there was no tree and I want to find out what exactly happened to it.”

Ms Hogg added that the tree had been planted near the new McJerrow play park which was upgraded last year — and she fears that workers may have mistakenly taken down the tree.

However, community councillor Ian McLatchie said he spoke to the park contractors about the issue. He said: “I’ve asked them and they are looking into it, but they more or less assured me that no-one would move or remove a tree.”

Meanwhile, Annandale North Councillor Stephen Thompson stated he had asked the council’s grounds team, but confirmed they also weren’t aware of any trees being taken down in the park. Councillor Thompson added: “The council has no knowledge of any tree being brought down but the resident is concerned it may have been cut down during McJerrow Park works.

“The resident is clearly upset about the issue and hopefully we can find out what happened to the tree.”

Get the full story in the Annandale Herald
Next issue published Thursday 2nd April 2020.