A GRIEVING brother has hit out at ‘flawed’ drugs support services in Dumfries and Galloway and called for an end to the stigma surrounding addicts. 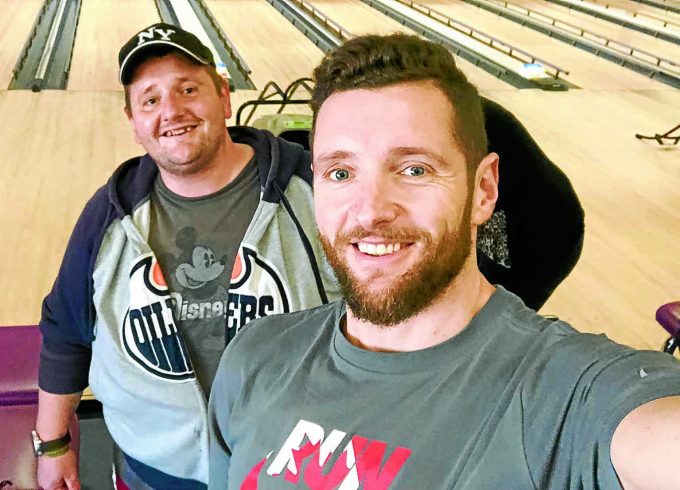 “No one should be discarded by society and judged on their path through life,” said Stewart Wyllie, who this month laid his younger brother Craig to rest after he spiralled into drug addiction.

The siblings grew up in Annan but after that took different paths, with Craig’s life cut short aged just 36.

He passed away in his Langholm home on July 23 and although a preliminary postmortem has so far returned unexplained, Stewart, 38, said: “Based on what we know, it appears that Craig ordered drugs online and this is likely the cause of death.”

And he recounted how his brother’s problems began in his 20s when he was a heavy drinker and recreational drug user, which all escalated in his 30s, adding: “Craig knew exactly what he wanted out of life, but there were so many hurdles for him to get over and ultimately addictions and mental health took over.

“Craig had a hard life and struggled with addictions and mental health issues that would haunt him on a daily basis.

“He had good intentions to try and get out of the path that he was in, but as is the case with this disease, it’s often like fighting a losing battle.”

Meanwhile, Stewart joined the army at 17, later moving to Canada, where he now lives with wife Jessica and their daughter Lucy, two, and with a second baby due next month.

But despite being thousands of miles away, he spent the last few years battling for help for his brother and said: “Craig struggled to access services and support to help him as he tried to move forward with his life.”

Stewart is now calling for an overhaul of how the NHS supports addicts, saying the system currently does not do enough to help the most vulnerable.

He said: “From my perspective it’s a flawed system.

“I’d like to see a system that is designed to be accessible for people who are not able to help themselves.

“Currently, you need to have a lot of knowledge and feel confident advocating for yourself in order to actually receive help.

“The system needs to be set up to meet people where they are at in their addictions, not expect them to get better first.

“Craig was told by the mental health treatment team that there wasn’t anything they could do for his anxiety until he stopped drinking. How is this helpful? He couldn’t stop drinking because he was anxious.”

He also wants more support for family and friends involved in addiction battles.

Stewart said: “I’d also like to see a more holistic approach, one where family and friends could much more easily be involved and feel more confident in supporting loved ones who are struggling.

“I did my best to support Craig from Canada but trying to co-ordinate with the care providers was an absolute nightmare – I often had to argue with them to get information.

“This was challenging for me, and I’m pretty confident with navigating a medical system, so I can only imagine what it’s like for those who aren’t as familiar.”

Reflecting on happier times with his sibling, Stewart said: “Craig was a happy, outgoing guy, that loved to be around family and friends. He was thoughtful, caring and had a heart of gold. He always took a lot of pride in my mum’s grave by keeping it clean and buying flowers and little ornaments.

“He loved his niece Lucy and they both had their own little language when we chatted over FaceTime.

“Last year I took him out for bowling and a meal on his birthday. He was in good spirits despite his situation and ongoing struggle. This would be the last time I ever saw him unfortunately.”

Craig previously lived in Lockerbie and spent a lot of time in Moffat at his grandparent’s house.

And he revealed the devastation of hearing about his death via posts on Facebook, due to the time difference.

However, treasured memories of a happy childhood are spurring Stewart and he said: “It is now too late for Craig, but I will continue to advocate for better support and a better understanding for others that are suffering the same ordeal that Craig had to endure for many years.

“Let’s try to end the stigma of addictions and mental health: no one should be discarded by society and judged on their path through life.

“We all have underlying struggles and some of us more than others.”

Hopeful that sharing his family’s story will have an impact, he added: “I want people to know that they aren’t alone and it wasn’t their fault for not noticing or trying harder.

“Until our society acknowledges how serious and prevalent the issue is, across all walks of life, families are going to continue to be ripped apart by drug related deaths and the grief and isolation that accompany them.

“I also hope that if the issue is more widely known, the NHS will make serious and significant changes to the services it offers to people with addictions and mental health issues, particularly when it comes to early intervention and harm reduction policies.”

NHS Dumfries and Galloway say they are unable to comment on individual cases but that they do offer an array of services targeted to help those gripped by addiction.

A spokesman said: “As always, we would encourage anyone with a concern or complaint to contact the patient services team in the first instance by phoning 01387 272733 or emailing dg.feedback@nhs.net.”

Discussing help available, he added: “The Specialist Drug and Alcohol Service (SDAS) offers a robust and comprehensive range of services aimed at best meeting the needs of individuals referred to the service.

“SDAS operate an open referral approach, allowing individuals to self refer or be referred by a professional group or concerned family or friends.

“Once an assessment has been completed, and interventions are required, this is done in line with the principles of a recovery-orientated approach, with three key partner agencies.”

The spokesman added: “There are numerous good examples of family and friends playing roles in people’s care, and this is an area which SDAS recognises this as a strength in individuals recovery. Staff work to accommodate people’s wishes, while always prioritising confidentiality.”