A MOTHER and daughter from Dalbeattie who took part in a 518 mile charity walk have raised over £10,000 – and were boosted in their efforts by The Proclaimers. 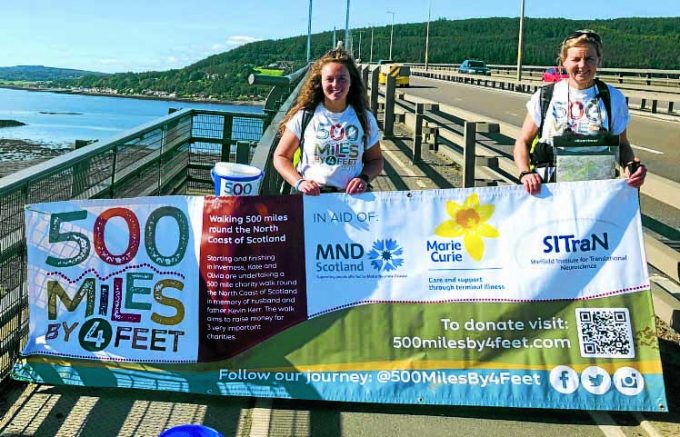 This challenge was especially emotional for the pair as they were doing it in memory of husband and father, Kevin, who sadly passed away in 2015 after suffering from Motor Neurone Disease (MND).

And MND Scotland is one of the charities that will benefit from their efforts, along with Marie Curie and the Sheffield Institute for Transitional Neuroscience.

Olivia said: “We are so grateful to everyone who has sponsored us.

“We feel very privileged to have made a small contribution to research into MND, as well as supporting care for people with terminal illnesses.” Accompanying them on their journey were family dogs Jessie and Mollie and they had a team of supporters cheering them on, as well as a good luck message from the musical duo.

The route started at Inverness Castle and they followed an anticlockwise direction to John O’Groats, then along the north coast and down the west. Olivia said: “We were really lucky to have an amazing support crew so we spent the majority of the time in what felt like a little bubble.

“We pretty much just walked, ate and slept for 29 days! It was very tiring but we had some great laughs, as well a few low moments.”

She added: “The dogs were great motivation too and always gave us a warm welcome after we finished a section of walking.

“Overall it was a challenging but incredible experience and we are very thankful to have had the opportunity to explore some beautiful parts of the country whilst raising money for causes so close to our hearts.”

Get the full story in the Dumfries Courier
Next issue published Friday 10th April 2020.