The Labour stalwarts were helping restore the constituency offices, at the foot of Friars Vennel, Dumfries, after they were deluged with flood water.

Dr Murray, who lives in Dumfries, and Mr Brown, from Annan, have first hand experience of previous flooding on the Whitesands.

Like other offices, retail outlets and businesses, the premises have suffered in numerous flooding episodes in the town’s riverside area.

The MSP and Labour justice spokeswoman expressed her solidarity and support for the many other people across the region suffering from the impact of Storm Frank.

She also praised the council teams, other agencies, emergency services and volunteers for their efforts in swiftly responding to the regionwide crisis. 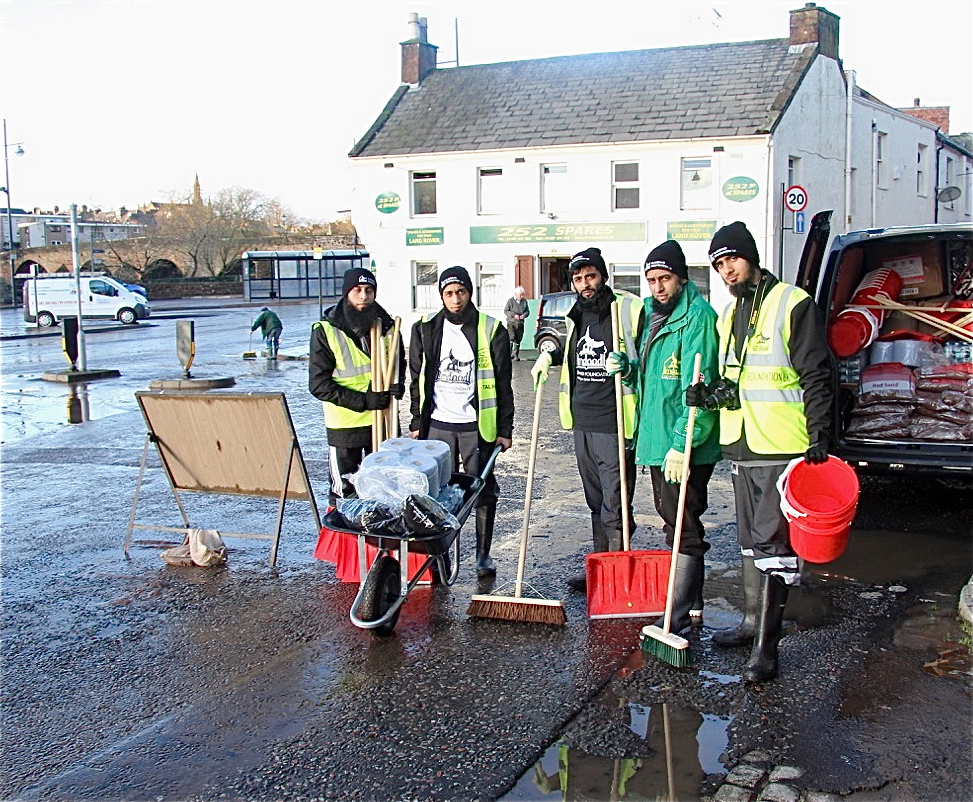 HELPING HANDS . . . volunteers the Al-Imdaad Foundation who have been helping with the clear-up and bringing supplies to those affected by flooding in Dumfries, Newton Stewart and Castle Douglas

Meanwhile, Scottish First Minister Nicola Sturgeon thanked emergency responders and those involved in the on-going clear up work in the aftermath of Storm Frank on a visit to Dumfries and Galloway.

In Newton Stewart, which suffered the worst flooding since 1963, she toured the town meeting flood victims and members of agencies working with them.

The First Minister said: “I have seen the devastation this has caused in Newton Stewart and my thoughts and sympathies are with all of those affected across Scotland.

“Local councils, emergency services and other responders have worked tirelessly to minimise the impact on communities, ensure the safety of people and are now working to help local areas recover. I offer them my deepest thanks for their efforts, which have no doubt spared us more significant damage.”

She added: “Along with my Ministerial colleagues, I received further progress reports from local partnerships at a resilience meeting today and am confident that the necessary work is underway to ensure affected communities recover as quickly as possible.”

Annan and Eskdale, Be

ANGER has been expressed at the decision to keep Dumfries and Galloway in level two covid restrictions for another week.

Research into covid and hearing

Garden project is about more than just plants

Time for level one?