A WHISKY boss is over the moon after his blend was shortlisted for a top award – and he’s even looking to open his own distillery and visitor centre. 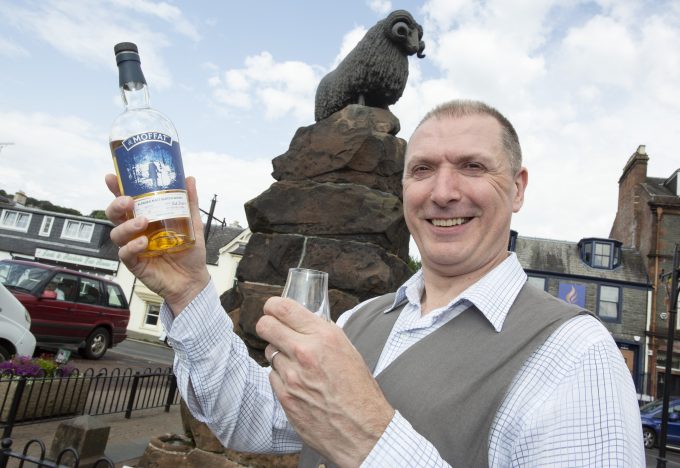 From his first taste as a teen, Moffat’s Nick Bullard knew he wanted to one day own his own distillery.

Last year he created ‘The Moffat’ — a blended malt Scottish whisky that reflects the flavour of the town.

The drink is on sale in hotels and shops around the region and beyond.

And now his malt has been shortlisted for a top award.

The Moffat is in the running for Product Launch of the Year as part of the inaugural Scottish Whisky Awards.

Nick, who runs the Dark Sky company, said: “I feel delighted to be nominated and honoured to be blending the best liquid in the world.”

Moving forward, Nick is committed to keeping Dark Sky local and has plans to create a distillery in the town.

Last month planning permission was submitted to transform Hydro Garage at Beechgrove into a distillery and visitor centre, but the application has yet to go before Dumfries and Galloway councillors.

Nick said: “Our next step is to build our own blending and bottling facilities in Moffat in 2020, and then to open a distillery in town.”

And, keeping it local, he added: “A true grassroots product, the formula and the packaging were developed locally.

“Graphic designer, Zoe Dutton, who has also designed the 2018 and 2019 guides for Visit Moffat, was delighted to hear that The Moffat has been recognised.”

A spokesman for the Scottish Whisky Awards said: “We aim to recognise the best Scotch on the market by rewarding people and teams working to deliver Scotland’s greatest global product.

“The independent competition is judged by a panel of experts drawn from across the sector, bringing together industry experience and market knowledge to recognise the greatest achievements in the production of scotch.

“The business awards will be presented to highlight the world leading and innovative performance of Scotland’s whisky distillers in a range of categories covering marketing, tourism and innovative business practices.

“In our wide-ranging blind tasting competition, Gold, Silver and Bronze Awards will be presented to products achieving the highest marks from independent taste panel gathered from Scotland, the UK and abroad.”

The winners will be revealed at a glittering celebration and awards ceremony on September 5 in Edinburgh.

Get the full story in the Moffat News
Next issue published Thursday 27th February 2020.