THE latest recipient of a royal honour has been presented with his medal. 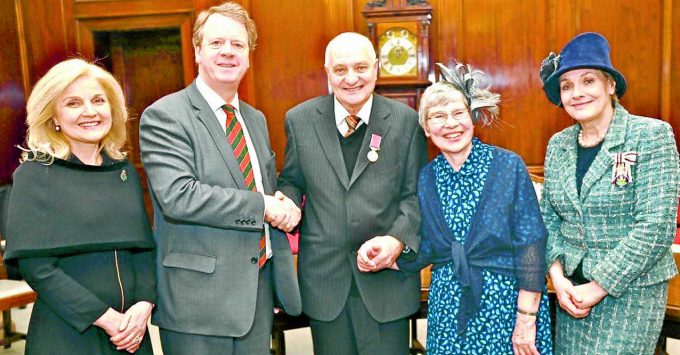 Peoples’ poet Peter Angelini, above centre, was awarded a British Empire Medal (BEM) for his voluntary contribution to the community in the Special Honours list.

Secretary of State for Scotland Alister Jack presented the BEM to Mr Angelini last Friday in a special ceremony at the council chambers in Buccleuch Street. Also present was Lord Lieutenant, Fiona Armstrong, along with Mr Angelini’s friends and family.

Presenting the medal to Mr Angelini, Mr Jack said: “It was my very great pleasure to present Peter with a British Empire Medal on behalf of her Majesty the Queen. Known to us Doonhamers as ‘the Angel of Dumfries’, Peter is the very definition of a good neighbour. Over a number of decades he has made a huge contribution to our community and is very much loved by local people as a result. “Peter Angelini is a remarkable and selfless man, who gives generously of his time and skills to help others. “He very much deserves to be honoured by Her Majesty.”