Let there be lights!

TWO more homeowners are vying to have the region’s most decorated Christmas house. 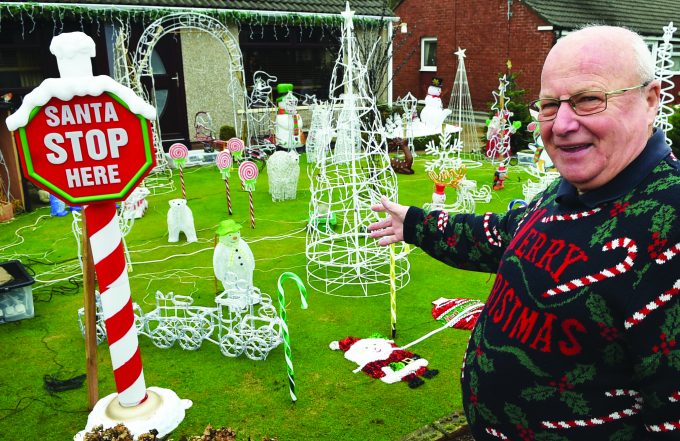 At Queensberry Brae in Thornhill, the Ross family have put up 15,000 individual lights coming from 70 different festive decorations. Dad Andy said: “It’s a combined effort from myself, my wife Lynn and our nine-year-old daughter Skye. We have built the display up over the years.”

As well as the blaze of lights, see below, they also have a Santa’s letter box for children to post their letters, with Father Christmas replying to each one. And they collect donations, with this year’s chosen charity being SANDS.

Andy added: “We have a snow machine which we operate from the living room when we see anyone on the CCTV making a donation or posting a Santa letter. The snow machine covers the person in fake snow.”

Meanwhile, George and Janette Bell have garnered a reputation as Mr and Mrs Christmas thanks to their efforts in Mossdale, Heathhall. The Bells decorate their house inside and outside every year for the enjoyment of family and friends. They hold a lights switch on evening for their nearest and dearest, which this year took place on the last Saturday in November and also attracted a large turnout of members of the public. George, pictured above, said: “I have been doing it for about eight years and it gets bigger every year. There’s thousands of lights, rope lighting, garlands, strings of lights, snowmen and inside there’s musical toys as well.”

He dishes out sweeties to children who stop by to see the display during December and said: “I really love Christmas and I love the children looking at the lights, it’s absolutely amazing.”