HE may only hold the post for a matter of months, but the interim chief executive of Dumfries and Galloway Council does not plan on simply ‘keeping his powder dry’.

Derek Crichton moved into the top job at the end of last year following the retirement of Gavin Stevenson, who held the office for over 12 years.

Stepping up from his role as director for communities, Derek has taken hold of the reins with a sound knowledge of both the local authority and Dumfries and Galloway, and has spent the initial weeks in the post getting to know more members of staff, further developing his breadth of knowledge of the departments and region, and trying to recognise areas for improvement.

“We need to up our game”, he says of the service.

But he is certain that making the position a permanent one is not for him, and he will revert back to his previous role upon the appointment of a new chief executive.

Speaking in the DNG Media offices this week, he said: “Upfront, I am not going to be an applicant.

“I am quite clear about that. It’s a personal choice.

“There’s a point that you get to in your career, and I love what I do, but I think this job now needs somebody who wants to do it for three to five years, because they need to give it that sort of commitment and therefore that’s not where I see myself.”

The closing date for the position was earlier this week but it will be some months before any incumbent will take over.

Before that, there will be intense review and scrutiny of the applicants, and the final few will go before the full 43 elected councillors and it’s they who will make the final decision.

Derek added: “If I was five years younger I’d look at it differently. But I see too many people who think they are indispensable, I’ve never really bought into that idea, the place would still survive without me, I’m quite clear about that.

“Secondly, I think you need to genuinely want to come in and do this for three to five years. It’s a huge job.

“A colleague of mine in another council described it as the most important job in the south of Scotland.

“In terms of putting a marker down of who we need to attract, this is a respected role.

“What people don’t realise is that Dumfries and Galloway Council, in terms of the 32 in Scotland, is probably, in terms of budget, people and salary of the chief, the tenth highest out of the 32.”

And describing the ‘stakes’ they are playing for, he said: “This is the tenth highest chief in Scotland.

“This isn’t a wee backwater, we’re playing second fiddle to Glasgow, Edinburgh, Aberdeen, Dundee, and all these places. We’re up there.”

When asked the question ‘how long are you going to be in the job?’ Derek said: “I don’t know, because we have to appoint in April and it depends when that person can start if they appoint somebody. But I imagine probably July.

“And that’s long enough to not want to just sit in a cupboard and do nothing for six months.

“I want to get out there, and make an impact in six months. And that’s what I agreed with the politicians I would do. I wouldn’t just do an interim role and keep my powder dry, I would deliberately go out there and start to really bring about some changes.” 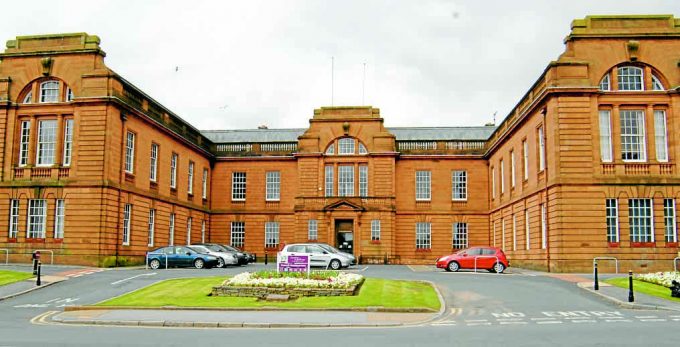 And his list of changes is ever growing, the more time he spends delving into the departments.

Tackling ‘wicked issues’, as he calls them, such as bins, and also improving relations between the council and the public and improving public perception of the service are top.

Then there is also the budget – which must be agreed later this month, on February 22.

He said: “We’ve got to get the budget over the line.

“Through COSLA, through lobbying the Scottish Government, lobbied successfully to an extent, we’ve got some more money, but it’s not going to fill the gap.

“But it is still a welcome development.”

And that funding gap currently stands at £11.7 million, between what the authority expects to receive from the Scottish Government and what it costs to run the council.

For Derek, the focus will be preserving lifeline services.

Recovery from covid is high on his list of priorities too, as the region makes moves to return to a semblance of normality.

He has appealed to the public to play their part in the recovery, by following guidelines to keep the community safe.

Coming up is also the local government election in May.

Marking the new year, Derek spoke publicly to praise his ‘dedicated’ workforce, and gave heartfelt thanks to all staff within Dumfries and Galloway Council, all those who served the people of the region ‘exceedingly well’ during the covid times and for going above and beyond.

Derek has acknowledged what is set to be ‘challenging year’ but has confidence that it can be met by the staff.

When he’s not working, Derek enjoys walking, cycling and bowling.

He is a keen football fan and can often be seen at local matches.