Four Dumfries and Galloway residents have been named on the Queens New Year Honours list. 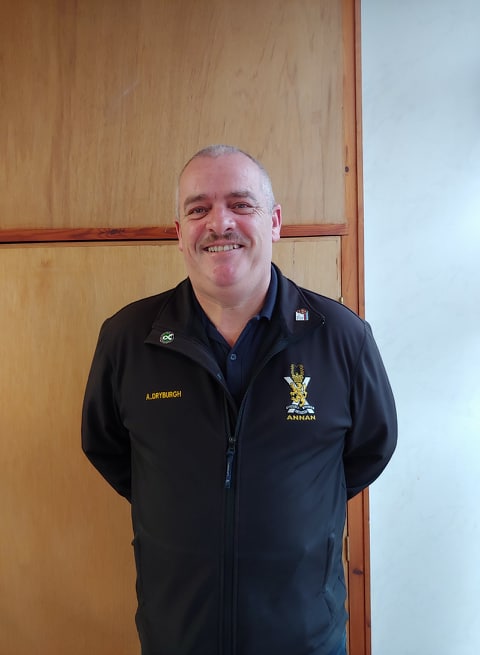 Archie Dryburgh, Mark Jardine and Kathleen Picken will each receive an MBE, while Alison Martin have been awarded a British Empire Medal (BEM).

Annan resident Archie Dryburgh, pictured above, is Dumfries and Galloway Council’s Armed Forces Champion and a local councillor for Annandale East and Eskdale. A former soldier with the Gordon Highlanders and Territorial Army, he now works with several charities and organisations who support serving soldiers and ex-forces personnel. He has been awarded an MBE for services to local government and the Armed Forces.

Also receiving an MBE is Kirkbean resident Mark Jardine, a funeral director with Jardine Funeral Directors and the driving force behind the creation of Roucan Loch crematorium at Collin. He is also the founder of the People’s Project whose aim was to rekindle community spirit in Dumfries. His honour recognises his service to the community in Dumfries and Galloway.

In the west of the region, Kirkcudbright music teacher Kathleen Picken will receive an MBE for services to music, education and charity. In addition to her work as a music teacher at Kirkcudbright Academy’s five cluster primary schools, she is the leader of the Farmers and Farmers’ Wives Choir which has benefited its members, audiences and charities across Scotland since its inception six years ago. The choir works to raise awareness of mental health and wellbeing within the farming community and has raised over £50,000 for various charities to date.

Meanwhile, Annan resident Alison Martin has been awarded a BEM for services to young people in recognition of her work as a team leader with the Prince’s Trust Dumfries and Galloway. She works with unemployed young people aged 16-25 and guides them through a 12-week programme of personal development and training which includes a residential team building week, a project in the local community and work placements. More than 50 community projects and 35 teams of young people have benefitted from the programme over the last 10 years.