A HAIR stylist championed by Miley Cyrus and featured in Vogue has teamed up with a quirky Dumfries salon in the hopes of making the Vennel the ‘Shoreditch’ of Dumfries.

Experienced hairdresser Tabitha Love, of Tabitha Love Hair, 27, saw a glitter hair roots creation, that she helped develop with former salon Blow, go viral last January as thousands of fans, including celebrities, shared and re-created it.
Speaking about the explosion of her look, she said: “Oh my God, it was so surreal.
“I’d created glitter roots for a hair competition and it failed. Three years on I resurrected it for a photoshoot at Blow in Glasgow, where I used to be salon manager, and when we launched it it went viral on Instagram.
“Miley Cyrus, make-up brand Lime Crime and Teen Vogue, to name a few, reposted my work. Later Miley wore my look on stage. It’s everywhere now!”
Nearly two-years on and Tabitha has re-located back to her native Dumfries and taken a seat at Curl Up and Dye Dumfries, located in the Vennel and owned by Nicola Mcminn, 29.
Since opening in April this year, the kitsch salon, which has a flamingo theme, has tried to offer something a little different.
And now the duo are hoping to put their part of town on the map.
Tabitha said: “I came back to Dumfries to bring new looks and styles which I felt Dumfries wanted.
“After years away it was time to be closer to family and get back to my roots – pardon the pun.”
She added: “I’ve known of Nicola for a few years as I am always watching out for new talent and inspiration. In real life – we only met four weeks ago!
“We work so well together and bring a unique perspective to hair artistry.”
Speaking of plans for the Vennel, she added: “I love the street and think with more enthusiastic people with fresh ideas, the street could really be amazing. I encourage new businesses to come to the Vennel and in the future I see it as the Shoreditch of Dumfries.”
Pink haired Nicola added: “I got into hairdressing because I love making people feel good about themselves. Going to the hairdressers is a real treat for some people and you want them to feel fabulous when they leave.”
Talking about her love of bright colours, she added: “I am like a magpie when it comes to colour, especially bright colours. And I just wanted to inject some colour back into Dumfries, that’s why I started Curl Up and Dye.”
And hoping to encourage other young business owners to set up shop at the Vennel, she said: “I chose to open a shop on the Vennel as it’s is an important part of the town. It used to be a bustling busy street with a varied range of shops. There is so much potential for the Vennel to come alive again. I hope that businesses are encouraged to open on the Vennel and add more diversity.”
To celebrate their love of hair and get hair fans into the Christmas spirit the duo are hosting an event next Tuesday, December 13, from 5.30 pm t0 7.30 pm to let locals get to know the salon. 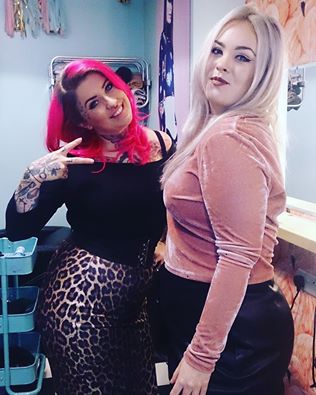 A DUMFRIES teacher will pull on his trainers today to run a marathon - despite the actual event being cancelled.

A RAFT of new resources have been released to mark World Menopause Day, which fell this week.