AN amazing haul of ‘treasure’ is the result of Alasdair Graham’s bottle digging hobby.

And he was at Lockerbie Rotary Club last week to tell members all about it.

Alasdair, who is a co-director of the family business, Barony Country Foods in Lochmaben, has been bottle digging for three or four years and said: “It started when walking along the beach where I found an old glass bottle stopper which generated my interest and curiosity as every item tells a story. This also stems from me having an interest in local history.

“Most of the places where I dig are in the Dumfries and Galloway region, but the biggest challenge faced is knowing where to dig. I research old maps and talk to people in their local communities, in particular older people, to establish the location of old tips/dumps, the majority of which are from the Victorian era.

“It is truly amazing what you find in the digs, all kinds of glass bottles, ceramic hot water bottles, ink wells, clay pipes, boots, coins, plates, earthenware pots, dolls heads etc. Most items are damaged, but what makes it even more worth it is when you find a wonderfully preserved item.”

He describes himself as ‘truly amazed’ at some of the objects, adding: “The curiosity only starts here, the fascination is in finding out when/where it was made what it was used for and how it may have arrived to where I found it.

“I love researching the history of my finds and sharing them with anyone that is interested.”

Described his most treasured pieces, he said: “Amongst my favourite finds are a Victorian ceramic hot water bottle with an eagle stopper from the Eagle Pottery in Glasgow and a Victorian beer bottle from the famous Horseshoe Bar in Glasgow which has been open since 1884.

“One of the most disturbing of my finds was a small bottle from around 1870 called ‘Mrs Winslow’s Soothing Syrup’, given to children who were teething, known as ‘The Baby Killer’. My research revealed that the syrup originated in Main, USA in the 1840s and contained huge amounts of morphine and alcohol. The doses suggested for infants is believed to have led to many deaths from overdoses or morphine addiction or withdrawal.”

He has amassed a large collection and took along some pieces to show the club, including ginger beer bottles, blue, green and brown poison bottles, clay pipes and household ceramic cups. 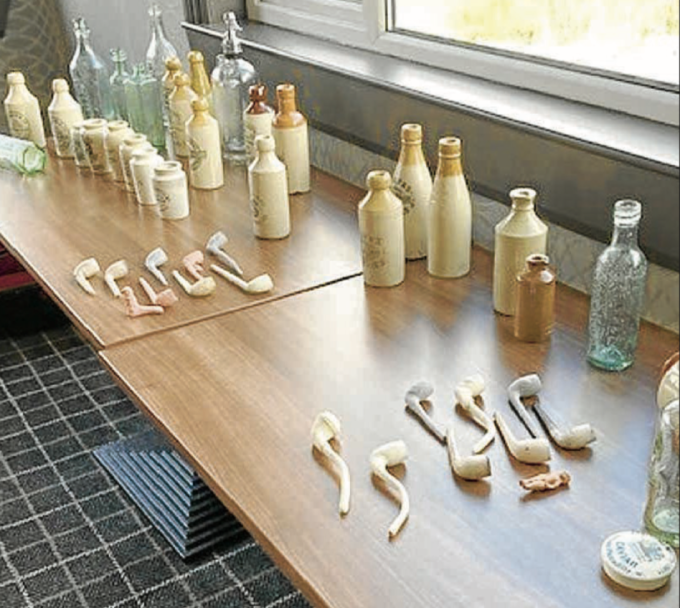 Town is on target with petanque contest

Now he's in the runnings to win big at the awards

A ROCKY road lies ahead for Dumfries and Galloway Council after last Friday’s election result, one long-serving councillor warned this week.