DG space links are out of this world

A NEW tourism map highlighting Scotland’s links to space exploration and the first Moonwalk has been released on the 50th anniversary of the launch of Apollo 11 and includes references to this region. 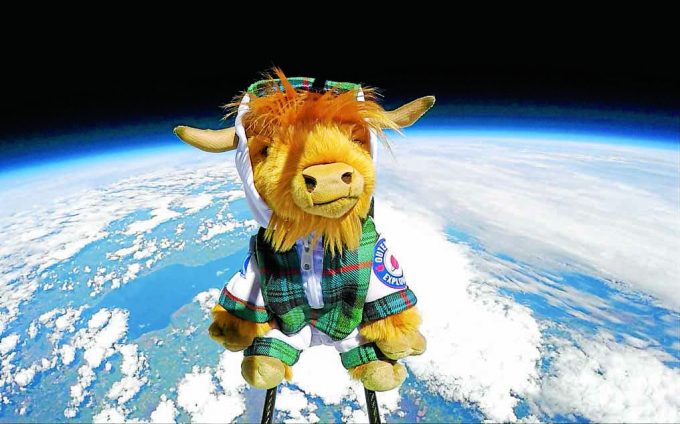 The Scotland is Out of this World trail is part of the new VisitScotland campaign of the same name which saw BuzzBò, the world’s first Highland Coosmonaut, soar 36,000 metres into near space wearing an Armstrong tartan spacesuit. He lifted off by weather balloon from Gilnockie Tower, near Langholm, the ancestral home of Clan Armstrong, and landing safely near Cranshaws in the Scottish Borders.

Local spots highlighted on the trail include Parton, which is the resting place of 19th century physicist James Clerk Maxwell, whose name was given to Maxwell Montes, the planet’s only feature named after a man; Langholm, the ancestral home of Clan Armstrong and the recipient of a visit by astronaut Neil Armstrong in 1972, where he became the town’s first and only Freeman; and the dark skies of Moffat and Galloway.

Malcolm Roughead, of VisitScotland, said: “Scotland is Out of this World offered the opportunity to delve into the past and celebrate the country’s contribution to space exploration and astronomy and its ancestral links to one of the greatest moments in history. The new trail reveals some of the country’s stellar attractions and locations to visit to firmly cement Scotland’s place in astro-tourism. After all, our best views aren’t confined to our awe-inspiring landscapes, but reach up high into the night sky above as well.”