A CRUMBLING wall in Moffat town centre is an “accident waiting to happen” and could collapse “at any moment”, a local heritage trust has warned.

The historic wall, built in 1827 as part of the construction of the Moffat Baths, now the B listed town hall building, runs along Westpark between the High Street and Moffat Surgery.

But over the last two years it has shown increasing signs of deterioration.

And as rocks dislodge and spill onto the single track road, there are fears it will soon completely give way.

Pamela Morgan, who lives at the bottom of Westpark, first reported the issue to Dumfries and Galloway Council 18 months ago.

Since then, Mrs Morgan has repeatedly raised her safety concerns to no avail.

She said: “The whole thing is in dilapidation – it is old. The council say it’s not their wall and they said to me in their last email in May that they’re not responsible for it.”

Unsuccessful attempts to get the council to carry out repairs prompted Pamela to invite Moffat Heritage Trust chair, Niamh Ní Shúilleabháin, to inspect the decaying structure.

After assessing the state of the wall, Niamh said: “There’s three stones wedged and if they go, everything above that will go as well.

“Bits below it have gone but this would be catastrophic, the rest will go in one piece I believe.

“It’s highly dangerous and it’s the road to the GP surgery where people go on a daily basis, an ambulance might need to get down there and it’s highly irresponsible to leave it as it is.

“The absolute worst case scenario is you have a child killed or somebody very badly injured. If there were a mum and toddler that walked down the road and it fell, the toddler would be killed and the mum would be badly injured – why are we waiting for an accident to happen?” 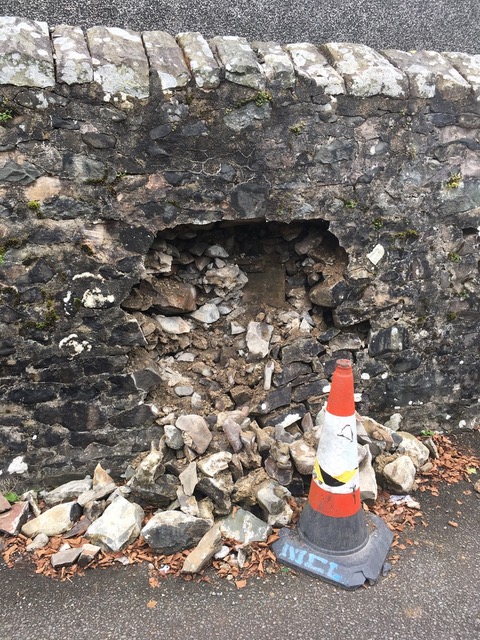 Niamh added that as the wall is part of the council-owned town hall building, it’s the responsibility of the local authority to oversee its restoration.

“If this was the wall of a private house, the council would have served a dangerous structure notice. You’ve got to go to building regulations and get them to do that and they’re probably not doing it because they know the bill comes back to them.”

In an email to Dumfries and Galloway Council last month, Niamh said the deterioration has come as a result of “moisture build up within the wall over a long period of time which is unable to evaporate through the hard cement pointing”.

“Whilst a repair might have been possible a year ago, an entire section now needs to be downtaken from ground to capping stones for the safety of the general public who need to pass this wall on a daily basis.”

Niamh also asked the local authority if it has the capacity to carry out the works, or if it will consider issuing a dangerous structure notice, adding that if the wall fails it could have “disastrous consequences”.

In response, community assets manager Nicola Simpson said she contacted the council’s repairs team to chase up the matter.

Mrs Simpson added: “I had reported this last year but clearly nothing has been done with it as yet.”

This week Dumfries and Galloway Council was asked if it intends to carry out repairs or issue a dangerous structure notice.

EMERGENCY services rushed to a ‘serious and large’ fire at a sawmill near Rigg on Tuesday night.

A COMMUNITY cafe, the chance to gain qualifications and a quieter way of life are all part of a new care home being developed in Lockerbie.

Hotel team save up for life saver