GLOBAL friendship and action against climate change, were the themes of a special event at Annandale Distillery at the weekend.

The attraction hosted a visit from a senior diplomat at the Foreign Ministry in the Indian Ocean island state of Sri Lanka.

Ambassador Hassanthi Dissanayake, currently the country’s Director General of Ocean Affairs, Environment and Climate Change, was visiting the UK as part of a delegation attending the UN COP26 climate change conference in Glasgow.

She also spent additional time in Dumfriesshire as guest of Professor David Thomson and Teresa Church, the couple who lovingly restored the long disused distillery which now produces award-winning fine malt whiskies as well as being a popular visitor destination.

Mrs Dissanayake is a long-standing friend of the couple.

A highlight of Saturday’s distillery event was a symbolic tree-planting to mark COP26 when the diplomat was joined by Dumfriesshire constituency MSP Oliver Mundell to perform the ceremony.

Mr Mundell’s father David, who is local MP and a COP26 delegate, unfortunately could not be present as he was self-isolating after testing positive for Covid-19 and subsequently experiencing symptoms.

In a speech, read by Oliver Mundell on behalf of his father, the MP stated he was impressed by the prominence and passion of young people in and around the Glasgow conference.

David Mundell continued: “With so much of the debate around climate change being driven by the voices of young people around the world, it is vital that their views are both heard and acted upon by those in positions of authority.

“It’s our children and grandchildren who will inherit the world we leave behind us, and — whatever the final outcome of COP26 is deemed to be — it’s our responsibility to ensure that it’s a world in which dangerous climate change has been limited.”

Professor Thomson said: “Whilst planting a single tree at Annandale Distillery will, in itself, have a negligible impact on climate change, its presence in the precincts of our distillery will hopefully act as a constant reminder to all of us, and to the people who visit us, of our universal moral obligation to act in a positive way to help moderate climate change.

“As of 2020, all of our whisky is now matured on-site rather than transporting it elsewhere. Amongst many other initiatives, it’s also our ambition to grow and malt our barley locally rather than bringing it in from much further afield.”

Professor Thomson and Teresa Church described how impressed they were by the tireless efforts made by Hasanthi Dissanayake to restore the coastal mangroves in Sri Lanka with their huge capacity to absorb CO2 and otherwise to act as a bulwark against rising sea levels.

The couple described their friend as a stalwart promoter of the Colombo Declaration on Sustainable Nitrogen Management and Professor Thomson added: “We feel very privileged that she took time out of her busy schedule to participate in this symbolic event.”

Talented young Ruthwell piper Curran Stainthorpe officiated throughout adding to the Scottish dimension of the event. 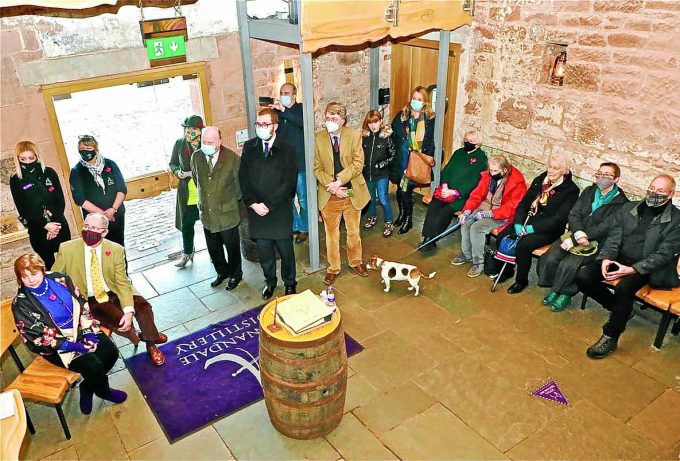 DUMFRIES and Galloway College is celebrating a double victory at the prestigious Green Gown Awards 2021.

Annan and Eskdale, Lockerbie and Lochmaben

WORKS to repair and reopen a road near Waterbeck look likely to be pushed back to next year - bringing the length of the closure to almost three years.

POULTRY farmers across the region have been instructed to house their birds from Monday in a bid to stave a wave of avian flu.

Do you know Tyro?