ONE of the region’s oldest and largest employers is taking part in an exhibition looking back at its illustrious past.

Boiler makers Cochran have been in Newbie, near Annan, since 1898 after relocating from Birkenhead.

In fact, they founded the village, building workers’ cottages near the factory, which are still there today.

Over the years they have employed thousands of people from across Dumfriesshire, including training up hundreds of apprentices, and also achieved a Royal Warrant.

Their boilers are used around the world and some of the more high profile contracts have included helping get the famous paddle steamer, The Waverley, back afloat last year, and one of their boilers was on the deck of the Lusitania, whilst another is at Rolex in Switzerland and there’s several in the Palace of Westminster too.

All of this and more will be part of their display at the Annan History Town event at the Corner House from this weekend. Quality compliance manager James Lynn, pictured, is co-ordinating the artefacts. He offered a glimpse into what visitors can expect: “In 1878 when the company started it was Cochran Engineers and Shipbuilders in Birkenhead. It needed to expand but was hemmed in either side by other companies. so, looked for an area with access to the river and sea, and came up here.”

Although still primarily ship builders, they moved into boiler making and that soon became, and remains, the main focus.

However, not many people know that Cochran also built one of the first submarines and details of that will be revealed in the new exhibition.

Initially the firm’s boilers were vertical but they are now horizontal, but otherwise James said the company is “still doing the same function all these years later: producing steam.”

Cochrans boilers can be found on every continent and they were the first in world to gain a licence to export boilers to China and still have blue chip customers in China and are today owned by a Chinese businessman.

James said: “There are only two boiler makers in the UK now and we are by far the biggest and the oldest.

“The product range is very extensive, from 50kg an hour boiler up to 48,000kg an hour. We have design capabilities too and can design to suit any customer requirements.

“Newbie is our only site, 200 people are employed by the company in production, sales, support service. Forty per cent of what we do comes from overseas.”

Last year they built the biggest boilers they had ever manufactured. James said: “They took about six months and pushed everything to the maximum but we managed it.

“They were 110 tonnes and went to Hartlepool.”

Covid affected the company ‘like everyone else’ but as they do a lot of work for hospitals and the NHS, production had to keep going, said James.

And operations are now almost back to normal, with a high order book and exciting developments in the pipeline.

The design team are working on reducing emissions on their boilers to meet, and surpass, new regulations.

“We are developing a low nox combustion system to reduce the level of nasties coming out,” explained James. “We have had really good results so far.

“It’s futureproofting, customers are asking for it. We are leading the way forward across all our products.

“There’s a big push towards hydrogen too, so we have been developing that.”

He added: “Our founder, James Taylor Cochran, would still recognise what we are doing because the basics are the 1878 design and it’s still relevant to the process we do here: take a power source, utilise the energy in it to produce hot water or steam, maximise the efficiency by using all the energy coming in for the product going out.” 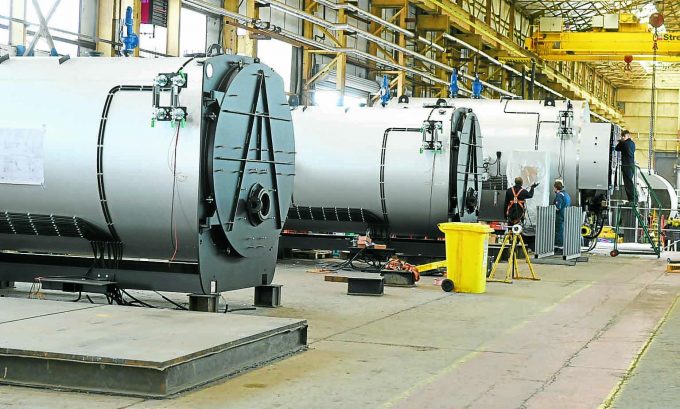 DUMFRIES and Galloway curler Hammy McMillan is keeping it in the family when it comes to representing Team GB at the Winter Olympics.

Don’t be caught out warning