Backpacking nurse bids to get home to help

A DUMFRIES nurse stranded in Australia is pleading with the government to help her get home so she can help support the NHS. 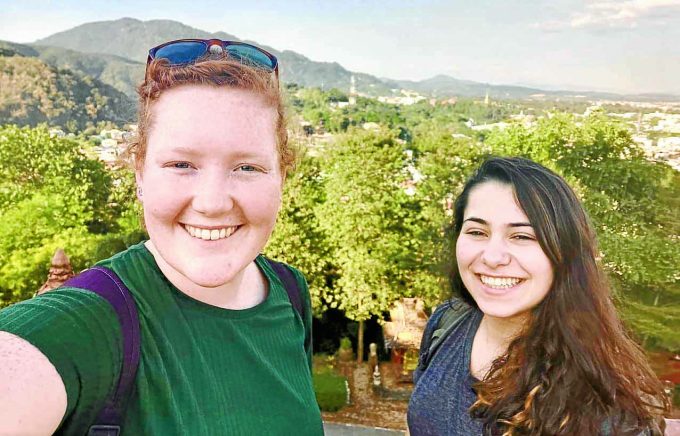 Erin Jackson is among the thousands of British people currently stuck abroad and wants to return to Britain and take part in its response to the coronavirus outbreak.

The 22-year-old and friend Sabrina Pia – who both graduated as nurses in July last year– left Scotland to travel for a year in November and have been in Perth for two months. The two have been working in Australia to try and save more money before continuing travelling.

However, with the virus spreading the Foreign Secretary has called for up to a million British people abroad to return to the UK immediately. Erin and Sabrina had booked the first available flight back to Glasgow for April 1, but were told their transfer flight from Dubai was cancelled due to the airport closing.

Erin told the Dumfries Courier: “We’ve been to the airport three times this week to try and get flights and have called all the airlines, but right now they’re charging anything between £4000-£10,000 for a flight home which may end up being cancelled. On Tuesday night an email was sent from the British Consulate to everyone who had registered their details saying there may be a flight from Perth the next day, but then they recalled the email shortly after. We still went to the airport and waited for two hours before it was announced that it was a chartered flight for Irish nationals only.”

The friends returned to the airport on Wednesday and spent the night there waiting for any flights. They were told by airport staff the final flights home were either overbooked and sold out. Erin added: “Right now we are waiting to see if the government will send any chartered flights to us. If not, we’ll be here for a while.”

She admitted it has been a difficult period for her and Sabrina as they are worried about family members back home, and said: “My mum works with the NHS so she’s on the frontline of it all. I’m also concerned about my grandparents. Some of Sabrina’s family stay in Italy as well, which is worse affected than the UK at the moment, so she’s pretty worried about her family there too. We both just want to get back to our families and support our NHS when we do get back. Both of us have signed up for the emergency recall of nurses as well, so if a state of emergency is declared we want to be there to help.”

The outbreak in Australia has been similar to that in Scotland, with bars and cafes shutting their doors earlier this week. “The last week or so I feel it’s got worse back home. Australia is probably a week behind the UK but it’s definitely heading in the same direction,” said Erin. “Even though their borders have shut I don’t feel it’s being taken as seriously as back home is now taking it. A lot of people have lost their jobs from the closures but there’s still a lot of people working, including me, at a call centre. It’s not an essential line of work but it’s still open. Our boss is just refusing to shut unless the government tells him to. “When that happens we’re going to have to look into working at the hospitals long term. That’s if we can’t get home.”