ANNAN Town Band hit the high notes last Saturday to be crowned Scottish champions for the first time in their history. 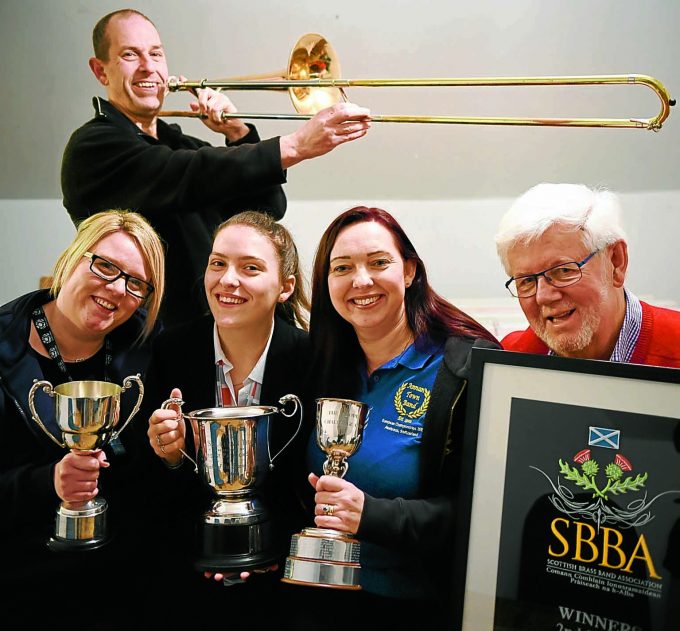 The band travelled to Perth Concert Hall to compete in the second section at the SBBA Scottish Brass Band Championships under the baton of musical director Andrew Warriner.

Their performance of set work The Golden Sabre by Kit Turnbull – inspired by the Hussar poet Denis Davydov – impressed the adjudicators who awarded them 93 points and crowned them Scottish champions for 2020.

And there was double cause for celebration as the band’s solo trombone player Mike Swale also picked up the coveted prize for best instrumentalist.

Adjudicator Anne Crookston said Annan’s performance displayed “a well controlled confidence about the quality of sound and music making”, while fellow judge Jappie Dijkstra congratulated them on a “a fine performance.”

Their win means they have qualified to represent Scotland at the National Brass Band Championships of Great Britain in Cheltenham for the second time in the space of three years.

It also means they will be promoted to the Scottish first section for next year, re-establishing their place among the top 20 bands in Scotland.

Band secretary Samantha Bryden said: “We have finished second in our section at the Scottish Championships seven times and come third three times, it was starting to feel like we would always be the bridesmaid rather than the bride!

“We were invited to represent Scotland at the European Championships in Switzerland last year and I think that really strengthened the band’s belief in our own abilities, we know we can compete at the highest level and do well.

“This success really is a testament to the dedication and talent of our band members, our resident conductor Simon Railton and our musical director Andrew Warriner.”

Before the fundraising and preparations for Cheltenham can begin, Annan Town Band will turn their attention to preparing for the Fife Brass Band Festival contest in Dunfermline next month.

The band are also hoping to record their debut CD later this year.

Annan Town will not be the only Annandale representatives at the national finals, however, as Langholm Town Band also secured their place at Cheltenham after achieving their best ever Scottish Championship result.

Langholm finished in second place in the third section, just two points behind winners Croy Silver, with their performance of Andrew Baker’s piece Endurance, inspired by the story of Ernest Shakleton.

It is the first time in the band’s 205 year history that they have qualified to play at the third section British finals and will be their first trip to the nationals in ten years.

And their achievement is all the more impressive as 11 band members are under the age of 25.

Band secretary Christine Calvert said: “The band are understandably delighted with the result and are particularly happy for our MD Chris Shanks, this is a just reward for his dedication and guidance.”