COUNCILLORS are meeting with officials this afternoon to urgently discuss the bridge situation in Annan - after two popular footbridges were washed away yesterday.

Ideas already mooted include calling on the Scottish Government for funding, bringing in the army to build temporary structures and even a community fundraiser.

And residents showed their support for the rebuilding of the 125-year-old Jubilee Bridge and the Cuthbertson Bridge, which dated from 1957, at an informal gathering at the Everholm this morning, pictured.

Dozens turned out to demonstrate the importance of the two bridges to Annan and to call for them to be reinstated as soon as possible.

Businessman John Pagani organised the event and said: “It’s obviously a sad day but a great day to see the amount of support in the town for our bridges and what special part they play in everybody’s hearts.

“We are not going to let it lie and if it takes the people of Annan to come together, that’s what will happen. Hopefully the council will step up and see how important it is and fingers crossed this will make a bit of a difference today.”

Annandale South councillors Sean Marshall and Richard Brodie said they had been inundated with messages since the bridges disappeared.

Mr Marshall said: “Everybody is so shocked, when you see the footage it’s unbelievable.

“All four councillors are devastated by what’s happened. We will do everything we can to ensure temporary bridges are put in until permanent ones can be sorted.”

Mr Brodie added: “These bridges are important to the community way of life, the town’s heritage and we have to work together.” 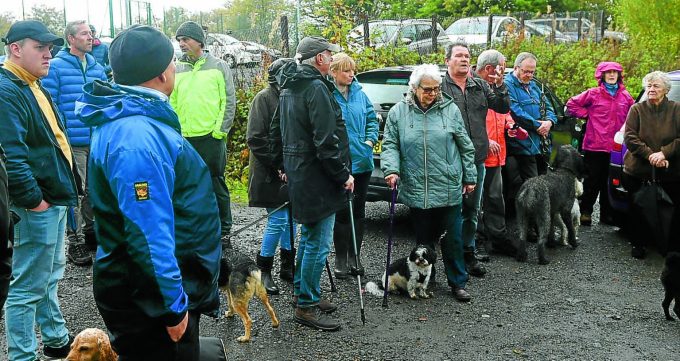 Christmas shoeboxes on their way

A £10,000 grant has been given to the Annan History Town Group to help bring in more visitors.

WEATHER warnings for snow and high winds have been issued for parts of Dumfries and Galloway.

Councillor Jackie is the best!

Do you recognise this woman?