A COURT has been shown a video from a police car which reached a speed of 128 mph in a chase involving a group of five motorcyclists on the A713 Castle Douglas to Ayr road. 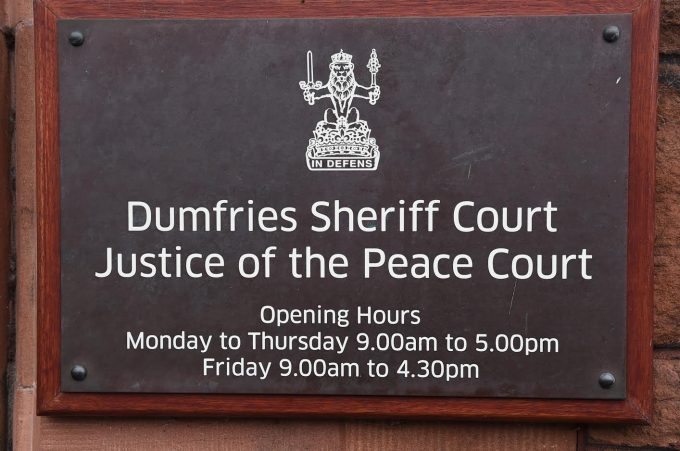 The unmarked patrol vehicle, which had been parked in a lay-by near New Galloway, overtook them one by one before passing the last and halting them at Parton.
And depute fiscal Lyndsay Hunter stressed to the court on Tuesday that the motorcycles were travelling at excessive speeds for the layout of the road – a typical A class country road with straight sections, but also many bends and corners with farm entrances and the possibility of animals on the roadway.
Andrew Gaston, 53, of Lochans Mill Avenue, Lochans; Simon Beswick, 49, of Rosefield Avenue, Stranraer; Andrew Beswick, 44, of Treebank, Dunragit; Carol Ann Brown, 31, of Lochaber Cottage, Lochanhead, Dumfries; and Gavin Thomson, 34, of Beechwood Avenue, Stranraer, were all “clocked” over various distances ranging from 2.4 miles to 7.7.
They were originally charged with driving dangerously, but the fiscal accepted a plea to the lesser charge of careless driving.
They admitted riding as part of a group in the same manner on various stretches of the road.
A solicitor said the five were motorcycle enthusiasts and all experienced drivers and this happened at the end of the “biking season” last October.
He added: “There was nothing wrong with their riding – they were just going too fast and they all knew that.”
In court on Tuesday, Gaston, Simon Beswick and Andrew Beswick were each fined £800 and had five points endorsed on their licences; Brown also had five points endorsed on her licence and was fined £700, and Thomson was also fined £700 and was banned from driving for 75 days.

Get the full story in the Dumfries Courier
Next issue published Friday 3rd April 2020.