A TEAM set to represent the region at the Special Olympics 2017 in Sheffield showed off their skills at Galabank on Saturday during the half-time penalty shoot. 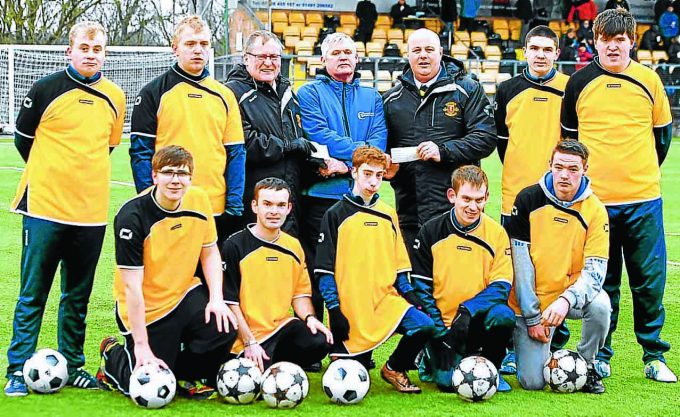 Dumfries and Galloway Special Olympics Football Team were collecting for Dumfries and Galloway Special Olympics Team who will be taking part in the 2017 Special Olympics National Summer Games in Sheffield from August 7 to Saturday August 12.
This event is the largest of its kind in the UK for people with a learning disability and gives a unique opportunity to compete in appropriate competition while making new friends and gaining many positive outcomes from this experience. The team will be made up of 35 athletes and 14 coaches, a total team of 49 people representing Dumfries and Galloway, making this the largest team from the region to ever enter the National Summer Games.
The D&G team members will compete in one of four sports: athletics, boccia, football or swimming.
The total cost of taking a team to this event is over £34,000, with the team members looking to bridge a shortfall of £24,000.
This is being raised through fund-raising and seeking sponsorship, grants and donations.
And the D&G Special Olympics Team wish to express a huge thanks to Annan Athletic Football Club for their support.
A cheque was received from Annan Athletic FC for £500 as well as one from the supporters club for £200. This together with a bucket collection of £216 made it a very generous day from the club and supporters alike.
Speaking on behalf of Annan Athletic Football Club, Ross Johnstone said: “We are pleased to be continually contributing and supporting the team in their quest to the games.”
Meanwhile, on Monday evening The Royal Burgh of Annan Community Council added their backing to the fund-raising efforts, contributing the sum of £500.