ANNAN welcomed a young man through the town this week as he continued a nationwide walk for charity. 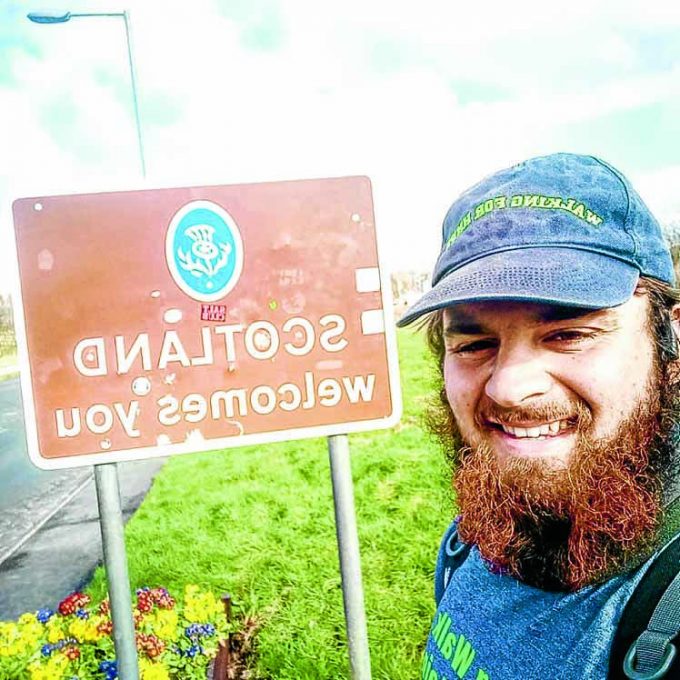 He set off on August 10, last year from Mablethorpe in Lincolnshire and is the youngest person to take on this mammoth challenge.

It is a journey which is extremely personal to Barney, because he himself suffers from the condition and wants to raise as much awareness as possible.

He said: “I have been diagnosed with HNPP, it is already affecting me in life changing ways.

“Noticing that I was different and discovering pain when writing or baking for example, was not a normal thing and a tough obstacle to overcome.

Since setting off the youngster has dealt with some major issues before crossing the border into Scotland.

Barney said: “I fell off a cliff at Bournemouth and had to be saved by a coastguard because I ended up in quicksand, which was quite terrifying.

“I’ve been bitten by three dogs during my travels also, which made me fear for my life on many occasions.”

He added: “The day before my 20th birthday I collapsed and my left arms and legs have become paralysed at different stages during my very long walk.”

Barney was welcomed in by Annan residents Ben and Louisa Jones when he crossed into the region last Saturday.

He is no stranger to the town as he has been here before when him and a couple of friends toured some of the distilleries in this area.

His arrival into Dumfries and Galloway has excited him for this part of the route and he has a certain objective in mind the further north he travels.

Barney said: “The west coast of Scotland route is like a porcupine.

“I’ll be climbing up Ben Nevis as I move further into Scotland.”

Barney is hoping to finish by October, by when he will have turned 21.

And it’s been a life changing experience, he said: “When I started I was clean shaven and had very short hair.

“Theres been ups and downs throughout but been a positive experience, these memories will stay with me forever.”