DO you like Pina Coladas? Then it’s time to rejoice as the region’s first rum distillery is now in full flow. 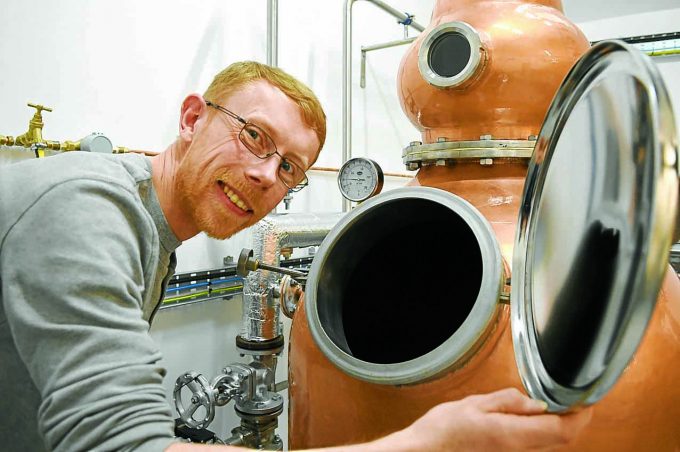 Dr Kit Carruthers is diversifying and taking part of his family’s large Dalton estate in a new and exciting direction.

Believing rum to be the next ‘it’ drink, Dr Carruthers, 38, first fell in love with the tipple while in Jamaica.

And now he has transformed disused outbuildings at his family home on the Dormont Estate into the Ninefold Distillery.

The transformation came with a £500,000 pricetag but after a year of building, and even longer planning, spirit is now flowing at the distillery, which is the only distillery in the south of Scotland to distil rum from scratch.

The rum is being hand made on site by Dr Carruthers in small batches from cane molasses, using a traditional copper pot still.

He said: “After two years of planning and building work, it’s a fantastic feeling to be finally producing my own rum in Dumfriesshire.

“I’m currently developing and testing a white rum that’ll be amazing in cocktails, and I can’t wait to have it served in mojitos, daiquiris and pina coladas across Scotland.”

He added “Nearly £500,000 has been invested in the distillery, the vast majority of this spent on local and Scottish trades and businesses.

“The project has been part-financed by the Scottish Government and the European Union LEADER 2014-2020 programme, as well as by Scottish Enterprise and Dumfries and Galloway Council.”

While the first product to launch will be a white rum, rum will also be casked and aged on site at the distillery to produce unique lowland aged rums.

The distillery will complement existing whisky and gin distilleries in the region, marking Dumfries and Galloway, and Annandale in particular, as a producer of quality, premium spirits.

The first product – Ninefold White Rum – will hopefully be available to buy and stocked locally by Easter.

And once production is running seamlessly, Dr Carruthers has plenty of ideas up his sleeve, including cocktail classes and much more.