A ONE-of-a-kind piece of ninth century Anglo-Saxon treasure unearthed in the region six years ago has been restored to its former glory.

It is the star find of the Galloway Hoard, discovered in Kirkcudbrightshire in 2014.

And archeologists suspect it was commissioned by a king or high-standing cleric due to its materials and quality.

It has now been fully appreciated for the first time since its discovery after a thousand-year accumulation of dirt was carefully removed using porcupine quills, revealing detailed engravings believed to represent the four Gospels – Matthew, Mark, Luke, and John. 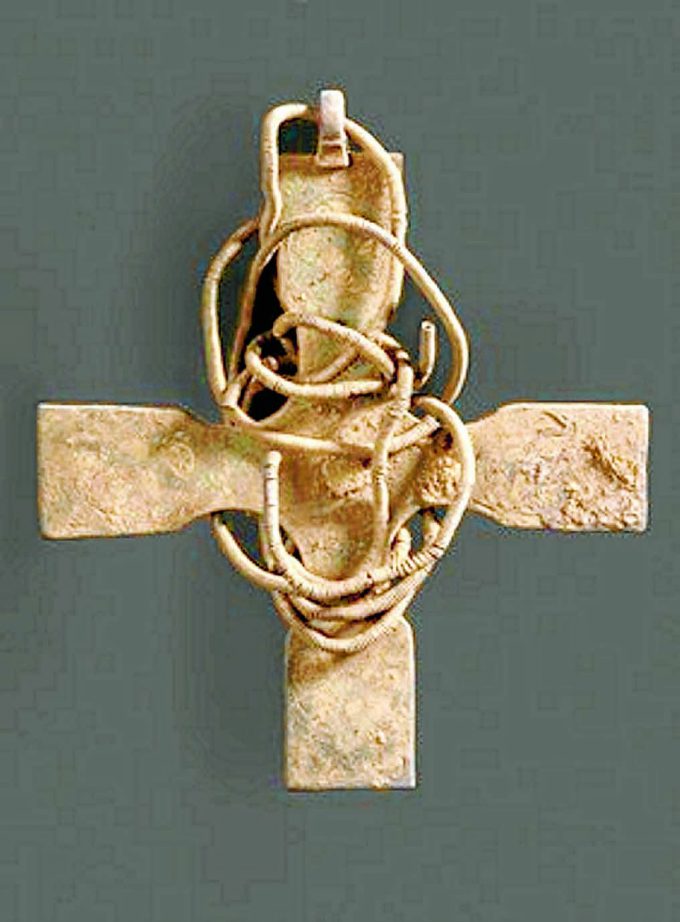 Dr Martin Goldberg, principal curator of early medieval and Viking collection for National Museums Scotland, said: “Our approach to developing further understanding of the Galloway Hoard involves great patience, careful examination and painstaking care of conservation, combined with wide-ranging research on the great variety of materials and objects in this outstanding hoard.

“The cross is a wonderfully visual representation of the work we have been doing to reveal new details about the Galloway Hoard. The conservation work lets us see this object clearly for the first time in over a thousand years, but it also reveals a whole new set of questions.

“Silver bullion, hacksilver and ingots, formed the upper parcel of the Galloway Hoard, but there was also this very unusual feature – a cross with a fine spiral chain – recently worn, but damaged. This one object poses many of the questions that we often start with when we are talking about the Viking Age. Was it bullion too, destined to be melted down into the types of ingots it was found with? We can easily imagine this cross being robbed from a Christian cleric during a raid on a church – a classic stereotype of the Viking age. But the complexity of this hoard forces us to reconsider simple stereotypes.”

He added that questions regarding how the treasure came to be buried in the region “can only be attempted once every object in the hoard is analysed and understood.”

Dr Leslie Webster, former Keeper of Britain, Prehistory and Europe at the British Museum, added: “The pectoral cross, with its subtle decoration of evangelist symbols and foliage, glittering gold and black inlays, and its delicately coiled chain, is an outstanding example of the Anglo-Saxon goldsmith’s art. It was made in Northumbria in the later ninth century for a high-ranking cleric, as the distinctive form of the cross suggests.

“Anglo-Saxon crosses of this kind are exceptionally rare, and only one other – much less elaborate – is known from the ninth century. The discovery of this pendant cross, in such a remarkable context, is of major importance for the study of early medieval goldsmith’s work, and for our understanding of Viking and Anglo-Saxon interactions in this turbulent period.”

How wrong could I be?

DUMFRIESSHIRE farmer Andrew McCornick, pictured, will step down as NFU Scotland president this year. In one of his last duties, he has released a new year message, calling for a new perspective.

CALLS have been made for a walk-in Covid-19 testing centre to be set up in Stranraer as a matter of urgency.

Mindfulness can help with lockdown stress

Family’s appeal for help to save pony

Meat free for a month