GUID Nychburris is underway, with the principals in place and a week of celebrations building up to the big day on Saturday.

Cornet Ross Hyslop and Cornet’s Lass Amy Muirhead were among the principals installed at a ceremony which took place at the Midsteeple in the town’s High Street on Monday evening, drawing crowds of spectators.
Singers, a pipe band and dancers had been lined up to provide entertainment at the installation, hosted by Gary Gillespie of Gee-Gee Entertainments.

Events taking place during this week have included the traditional Kirkin of the Cornet at St Michael and South Church last Sunday, the Guid Nychburris Autotest held at the Heathhall runway and Songs of Praise at Dumfries High School.
The Siller Gun clay pigeon competition once again took place, with the top team named as Hunts Hot Shots, and Chris Collins the best individual shot.
The junior section was won by Todd Martin, who had never shot before, while the ladies trophy went to Fiesty Fillies. 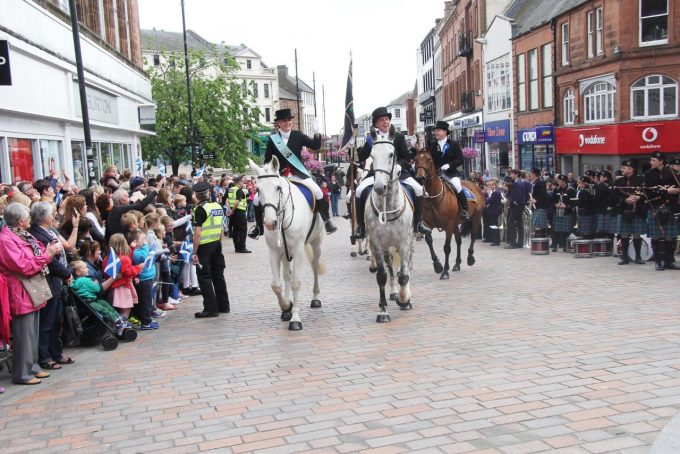 Schools football competitions took place at Palmerston and the Senior Citizens Concert was held at the Cairndale Hotel, which also played host to the Cornet’s Ball on Wednesday evening.

LORRIES were targeted, entered and some damaged at two sites in Annandale overnight on Tuesday.

STRIKER Gavin Reilly believes he’s returned to Queen of the South as an “all-round better player” and hopes he can help fire them back to the Championship at the first time of asking.

TWO friends have raised money for organisations close to their hearts after taking part in the West Highland Way Race at the weekend.